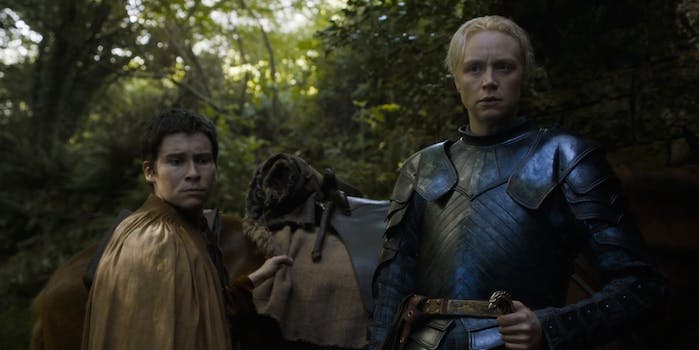 No, a popular character isn't getting resurrected.

Warning: This article contains massive spoilers for Game of Thrones and A Song of Ice and Fire.

The latest Game of Thrones rumor to go around the Internet about the upcoming fifth season had eager book fans hoping an older plot point (as well as a missed character) came back from the dead.

Book readers were in an uproar after the episode “The Children” aired last June, not because it was a terrible episode by any means (and plays better on rewatches), but because of a complete lack of Lady Stoneheart. She’s mysterious and cruel, and she’s unable to talk unless she covers the wound on her throat that never truly healed. She’s unforgiving and she sees things in black and white, which causes problems when encountering characters in gray.

Usually, it takes some time after finishing A Storm of Swords for her identity to really sink in—once you pick your jaw up off the floor.

Most novels and shows adhere to the unspoken rule of “dead means dead” unless you’re dealing with a priest of the R’hllor faith who resurrect people and your name is Beric Dondarrion… or Catelyn Stark. (So far, anyway.)

It’s one of the biggest twists to come out of ASOS (perhaps almost as much as—or even more than—the Red Wedding), and season 4 is mostly based off that novel in A Song of Ice and Fire. It managed to wrap up almost every lingering plot point from it except for Jon Snow’s ascension to Lord Commander of the Night’s Watch, at least until the credits rolled and there was no Lady Stoneheart to be found.

Fans had almost given up hope, really; comments from the showrunners about “The Children” weren’t exactly encouraging. And then just days after the fifth season trailer leaked and premiered online, they noticed something peculiar on actress Michelle Fairley’s IMDb page. 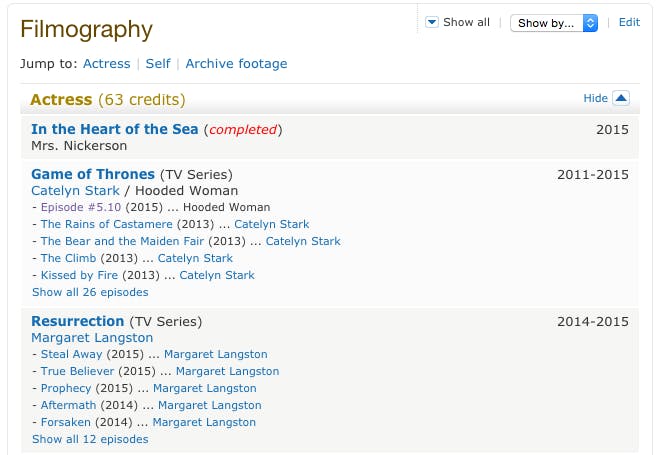 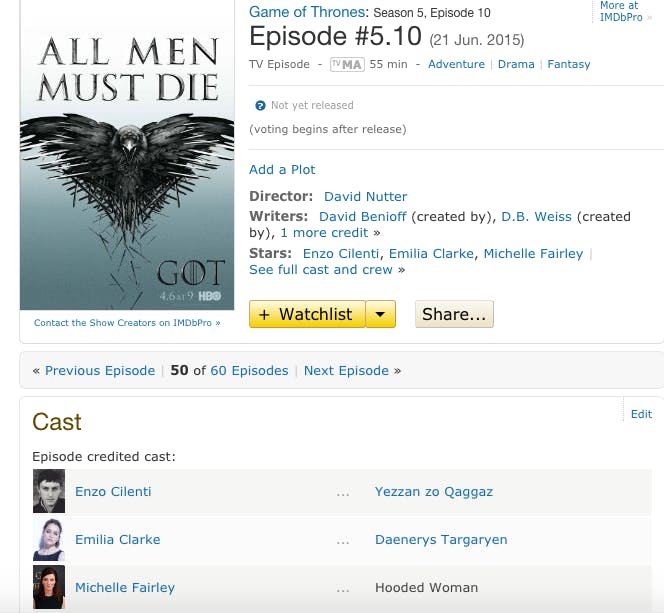 Right there, listed right under Fairley’s appearances on Resurrection—where, ironically, she plays a woman brought back from the dead—is the answer. Lady Stoneheart didn’t appear at the end of the fourth season because the showrunners had her slated for the end of the fifth season instead, as someone called “Hooded Woman.” For some, that was confirmation enough; the appearance of Emilia Clarke’s name above gave weight to it since as a major character it’s likely that Daenerys Targaryen would be in the finale.

However, despite how much we use IMDb as an authoritative source when it comes to the cast and crew of big movies, it’s not as reliable as we think. It’s not like Wikipedia, but IMDb users with an account are allowed to submit and edit information pertaining to an actor’s credits (or their own, if applicable). It’s as easy as clicking on the “Edit Page” link and filling out the relevant information. According to IMDb’s FAQ, it’s up to the IMDb Data Editors to process and then approve the information.

It’s this factor that made many fans skeptical about the cast reveal, at least until they let the hype over the mere thought of it happening take over the sense of reasonable doubt.

For the thousandth time: IMDB is updated by fans and cannot be trusted. You can bet major spoilers wouldn't be posted there first.

Soon enough, our doubts were rewarded with a confirmation, and our hopes were crushed yet again.

“There hasn’t been any discussion about her returning to the show after Season 3,” someone who represents Fairley told HuffPost Entertainment Tuesday. “As of now, this is completely incorrect.”

The post from Fairley’s IMDb page has since been removed, and her last Game of Thrones appearance is officially listed as “The Rains of Castamere.”

There’s no plans to bring Fairley back to Game of Thrones, falling back in line with what we were told in the past. Alex Graves, the director of “The Children,” revealed that it was never part of the plan to bring Lady Stoneheart into it and said that showrunners David Benioff and Dan Weiss didn’t give him any information about a possible future appearance.

“But to bring back Michelle Fairley, one of the greatest actresses around, to be a zombie for a little while – and just kill people?” Graves said. “It is really sort of, what are we doing with that? How does it play into the whole story in a way that we’re really going to like?”

When asked by Entertainment Weekly about the backlash that followed Lady Stoneheart’s absence last year, Fairley said, “Yeah, the character’s dead. She’s dead.” She added that she respected the writers’ decision about the arc.

However, it’s that additional “as of now” in Fairley’s statement denying her return to Game of Thrones that has people going “Hmmm,” mainly based on the thought that if Lady Stoneheart was never to come into play wouldn’t she just say it?

If the show were to follow the books closely, Lady Stoneheart would’ve been resurrected around the third season finale and as far as her first appearance goes, that would’ve been around “The Children.” But there’s still one logical point in the story that, were Benioff and Weiss to go that route, Lady Stoneheart could still come into play.

Once Beric Dondarrion gives his life to resurrect Lady Stoneheart, she becomes ruthless and vows revenge on anyone who had a hand in the Red Wedding or is associated with the families who killed her and Robb Stark (so basically all Freys, Boltons, and Lannisters). As the new leader of the Brotherhood Without Banners, she spends a good part of A Feast For Crows executing the plan with a pile of dead bodies at her feet.

Whispers of her terror travels throughout Westeros and to the ears of Brienne of Tarth and Podrick Payne, who spend much of that book searching for Sansa Stark like she promised Catelyn. Following an encounter with a group of sellswords, Brienne and Podrick are rescued and captured by Gendry (who’s part of the Brotherhood now) and brought to Lady Stoneheart.

And well, that reunion doesn’t exactly go as well as Brienne thought it would.

It’d be easy for the writers to set up. They could, hypothetically, throw in gossip whenever characters travel—whether it be Brienne and Podrick, Sansa and Littlefinger, or anyone else out on the Kingsroad. Make it mysterious and intriguing, leaving show viewers to speculate. It’d work for a season-ending twist, but it could easily be revealed earlier in the season.

Plus, it’s the last piece of Brienne’s story and adds the connection to bring Jaime Lannister back into the picture. Is she going to serve him up to die, or is she going to try talking reason into Lady Stoneheart and try to save him? That’d be a hell of a cliffhanger—and one that’s lingering for readers until whenever The Winds of Winter comes out.

Could they finish Game of Thrones without Lady Stoneheart? As of now, it seems to be that way, unless we end up getting that surprise reveal after all. Aside from it being another blow for fans who want as much faithfulness to the books as possible, it’d be a disservice to the show fans to deny such a huge twist with seasons of setup.