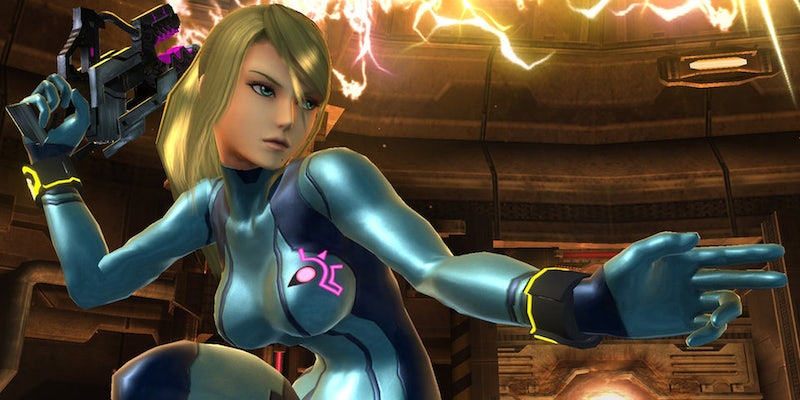 “She was amazing—brave, strong, smart, inventive.”

It was called one of the most “jaw dropping” moments in video game history.

Samus Aran had just defeated a planet’s worth of parasitic organisms thanks to a futuristic power suit in Nintendo’s 1986 classic Metroid. Retrofitted with an arm cannon and the ability to transform into a metal sphere, the suit was a powerful piece of technology that covered Aran’s entire body, rendering the warrior genderless.

“You’ve fulfilled your mission,” read the message at the end of the game, as a pixelated Aran stands on planet Zebes. “It will revive peace in the space.”

The message faded away as Aran’s power suit began to flash rapidly. The suit disappeared, revealing a woman in a bikini waving. The 16 second-long sight of Aran in a bikini became a watershed moment for video games.

Up to that point, nearly every title released by Nintendo and its competitors featured a male protagonist. Aran was the anti-Peach, a woman who kicked ass and didn’t need a plucky plumber to save her.

“She was amazing—brave, strong, smart, inventive,” Audrey Drake wrote for IGN in 2011. “Best of all, the developers didn’t feel the need to justify why a woman was so cool. She just was. It wasn’t the result of magic or some contrived scenario, and it wasn’t with the help of a man—it was all Samus, and that’s another reason her character was so meaningful.”

In Metroid Prime 3, Aran’s pixelated bikini was swapped for a skin tight jumpsuit. In Metroid: Other M, the camera lingers over a voluptuous Aran lying on a table in another firm fitting outfit. And that’s only in the video games themselves.

Promotional images for these modern games have drawn attention to Aran’s body. 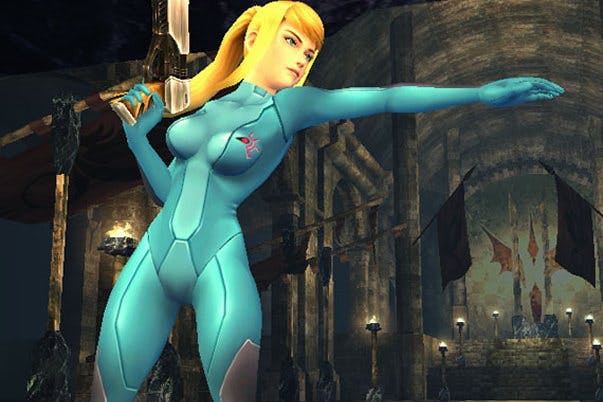 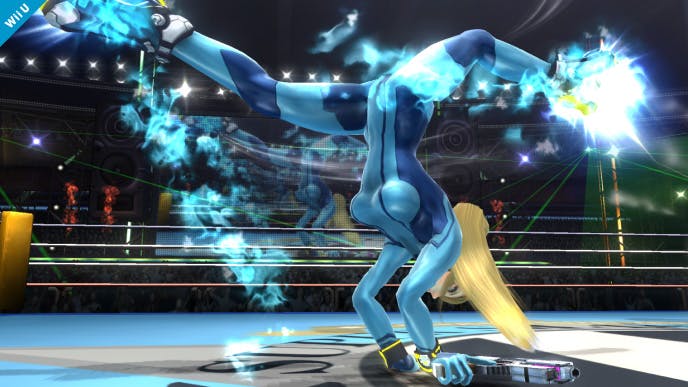 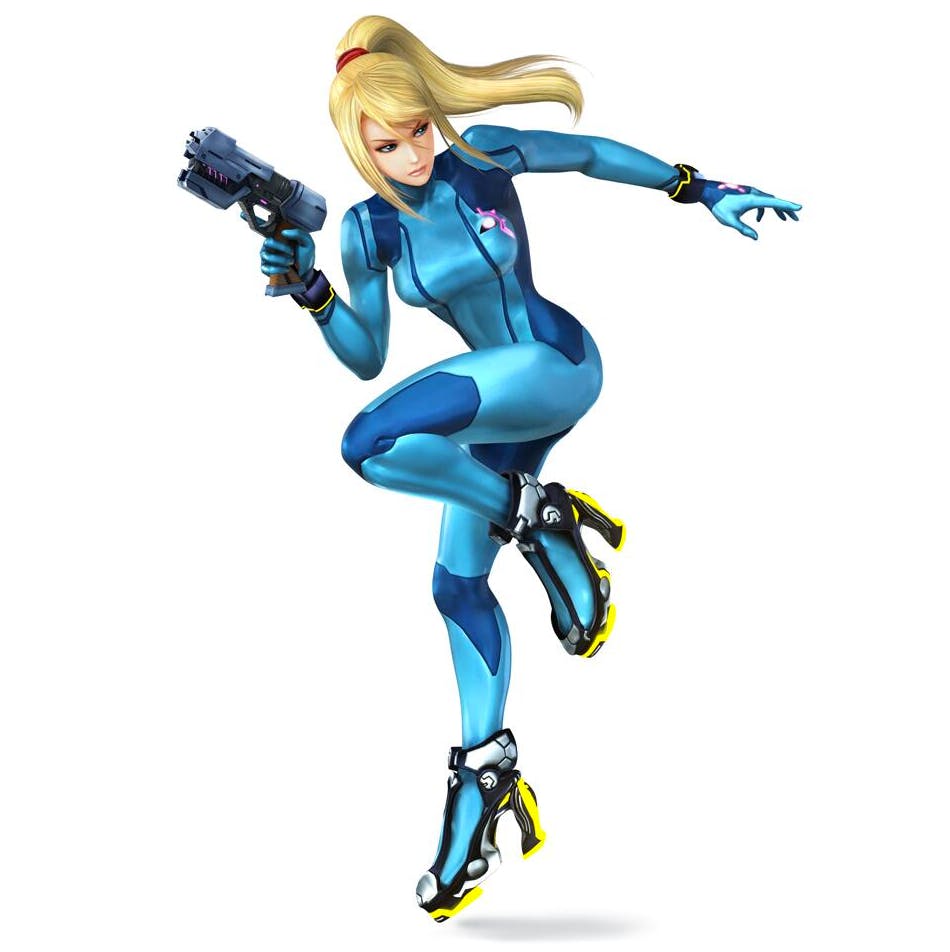 And here’s a promotional image for the Super Smash Bros. game starring Aran. 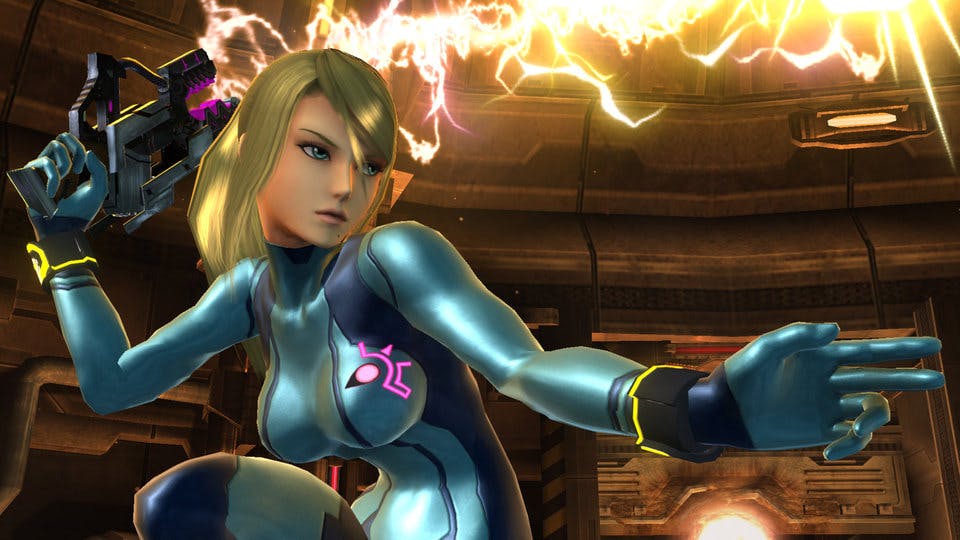 Some people have argued that as one of gaming’s first true female heroines, why not emphasize Aran’s story or skills as opposed to her body? While some argue female characters need not be covered up, others point out that Aran is much more than a piece of eye candy to gawk at (as has been the case for women portrayed in the Grand Theft Auto series, for example).

“[T]here’s nothing wrong with sexuality in and of itself,” Drake adds. “No, it’s more the blank stares, lack of personality or inner strength, and overall uselessness that tends to get people up in arms.”

These people “up in arms” include Anita Sarkeesian and Keza MacDonald, who have spent the past few years making a case for strong, substantive, female characters in video games.

Sarkeesian is the person behind “Ms. Male Character,” the idea that a female characters in most games are essentially a cloned replica of the default male character. These “female” characters are defined by something overtly feminine, like a pink bow or exaggerated feminine features. In essence, the characters seem to be an afterthought as opposed to a legitimate part of the game narrative.

“In 2009, researchers at the University of Southern California carried out a comprehensive study of the 150 biggest video game releases—they discovered that less than 10% of game characters are female,” MacDonald wrote for the Guardian in February. “Acknowledging the existence of women and reflecting that in video games is not positive discrimination. People are not asking for every single game to star a female protagonist; they are asking for more than literally one or two titles a year to star a female protagonist.”

This year there have been about 100 video games released across PC and consoles. While some feature secondary female characters, Tomb Raider (which was technically released last March for consoles and for Mac OSX last month) is the only title with a leading female character. That number could double this year, depending on when the next Metroid installment for the Wii U is released.