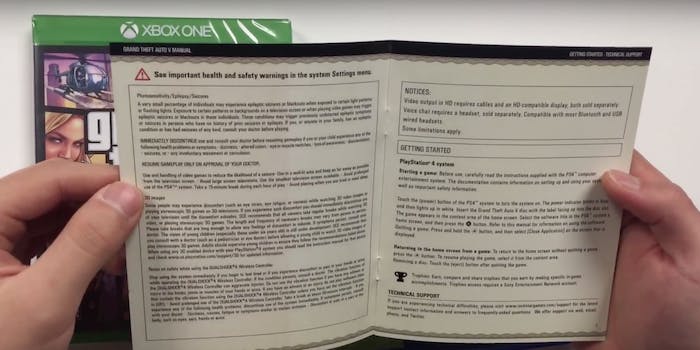 This kid's mom was understandably horrified.

Remember back in the ’90s when some parents and lawmakers tried to claim video games were bad for kids? They were wrong—with this rare exception.

Kayla McAllister, a mom in Havana, Florida, told Kotaku that her 11-year-old son found a suspicious baggie stuck in the manual of a second-hand copy of Grand Theft Auto V. McAllister contacted the Gasden County Sheriff’s Office, which confirmed the substance in the baggie was methamphetamine.

McAllister and her son had purchased the game at a Tallahassee GameStop on Sunday, and she was understandably horrified and angry that her son and 3-year-old daughter could have been exposed to such a dangerous drug.

According to Kotaku, McAllister posted the following message to her Facebook page:

Today i took my son to gamestop in Tallahassee to trade in games and get some new ones. When he opened the booklet inside one of the pre owned games he ( MY ELEVEN YEAR OLD SON!!!!!!!) found this. A baggie of fucking meth! Clearly the game was not properly checked when it was traded in and because of the carelessness i could have lost a child. Thankfully He brought it right to us and said what is this?

She also urged parents to double check second-hand copies of games. This is actually the second recent incident involving meth found in a game sold by GameStop, the first of which involved an 11-year-old boy in Lake Charles, Louisiana.

You can check out the police report filed by McAllister over at Kotaku’s website.