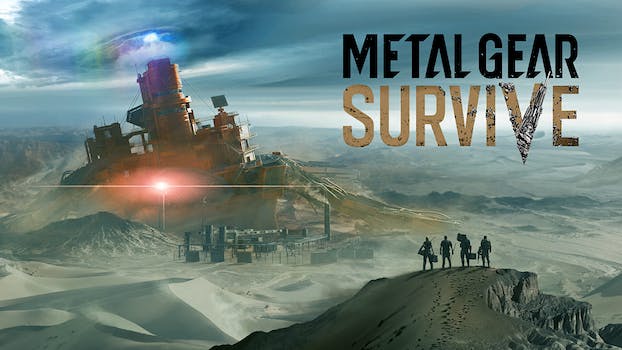 Going hands-on with Metal Gear Survive proves that the game isn't a disaster.

To many, the existence of Metal Gear Survive is an affront.

The tumultuous development of Metal Gear Solid V is no secret at this point, as it led to the splintering of series creator Hideo Kojima and game development company Konami, which retained the rights to future games. Diehard Metal Gear fans effectively saw this as the end of the franchise, setting their sights on Kojima’s next project and never looking back.

However, Konami made it clear that Metal Gear would continue to exist. Pachinko machines in Japan were unveiled to minor chagrin, but it was Metal Gear Survive, the first game in the series without Kojima, that set the community ablaze with rage.

Recognizable characters and the tactical steal that defined the series were absent from the first gameplay demo. Instead, players got a bombastic demo showing gruesome creatures, generic faceless soldiers, and a bastardization of the action that made MGSV so great.

Hideo Kojima sounded like a majority of the series’ fans when he expressed that “Metal Gear games are about political fiction and espionage,” asking “where do zombies fit in with that?”

Metal Gear Survive is fun to play, and could actually be a good game.

Players who have never touched Metal Gear may be more open to the premise of this spinoff than those who are invested in the series’ lore. Borrowing from the tower defense genre and a host of wave-based survival games, this experience is built around four players working together to defend a drill in the center of the map from an endless stream of zombies.

Survive uses the Fox Engine, built from the ground up for MGSV, and returning to its open-world trappings is sublime. Your nameless avatar moves as fluidly as Big Boss, though it proves to be less proficient in combat. There is obviously less emphasis on sneaking around undetected this time around and more of a fixed limit on maintaining stamina as you run for long stretches. This character is no superhero, but merely a foot soldier, as Survive never fails to remind you.

Weapons like spears and bows make a strange first impression in Metal Gear, but they quickly grow into essential pieces of the arsenal. Ammo is sparse, and refueling takes too much time as the horde encroaches, so close-quarters combat often turns into the only option. You’re able to control the direction and power of each swing, which is helpful for taking out an individual foe, but less so when swarmed by a crowd of crystal-headed creatures.

The zombies have a transparent weakness in the form of glowing spires emerging from the tops of their heads, and there is only a slight variation among enemy units. Bombers move slowly and make a massive impact when they die, while armored units and more limber enemies can cause trouble in later rounds when your team is more spread out. But for the most part, defending your objective relies on staring down a line of encroaching wanderers and stopping their slow, steady onslaught.

As far as base-building goes, Metal Gear Survive doesn’t do much to reinvent horde-style gameplay, allowing players to loot resources, craft defenses, and repair their installments. Outside of traditional barbed wire fences and automated turrets, players can make use of oil slicks and balloon traps to trip up their foes. Survive gives players a massive inventory, as well as the freedom to prioritize each piece of their strategy.

Upon introduction, the user interface is overwhelming and swamped with various menus and walls of text, though helpful in managing several moving parts. Hopefully, the main game comes with a series of tutorials, because this beta asks players to struggle with hours of trial-by-fire before feeling comfortable with the inventory controls. A glowing ring surrounds the character, and resources can be scooped en masse by holding down a single button. Even dying without completing the wave’s objective can be beneficial. Every failure informs the future, as you keep the items you were able to salvage.

Gathering those elements, metal, plants, and ammo makes up a great deal of the time spent outside of combat. Most maps are stuffed with things to find, as well as ample space to craft new tools. There’s more than enough room for four players to interact with the space efficiently, which is helpful, as that’s when the game plays best. Metal Gear Survive does offer a single-player mode but seems more suited for cooperative gameplay.

To play Metal Gear Survive might be the only way to earn some respect for the game. Despite the apocryphal story, lack of character, and seemingly lazy cash-in on one of gaming’s most revered franchises, Survive manages to deliver on its premise and provide thrills within a tested format. It remains to be seen what the final product will look like, especially with the potential for an insidious in-game economy built around progression and supply drops. Still, after over 10 hours with the gameplay, fans may want to rethink their certainty that this won’t be something worth enjoying.