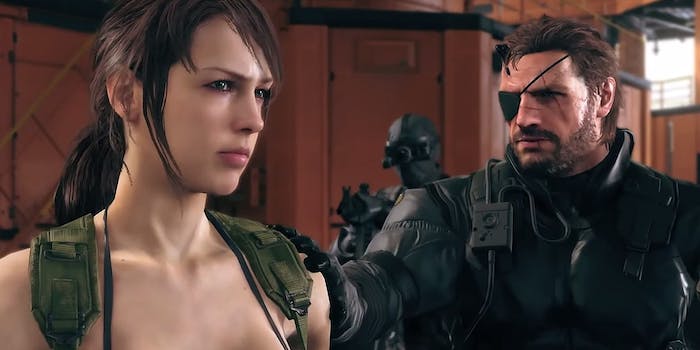 They're just making it worse.

The new character, Quiet, is a sniper who wears what basically amounts to a string bikini, accessorized with weapons, torn leggings, and combat boots.

Combine this with the fact that she cannot speak, and you have a perfect storm of seemingly sexist characteristics: a semi-nude woman with gravity-defying boobs who runs around shooting people without being able to verbalize an opinion. But when Quiet was first announced, Metal Gear Solid creator Hideo Kojima made it clear that he thought the backlash was unfounded.

I know there's people concerning about "Quiet" but don't worry. I created her character as an antithesis to the women characters (cont)

appeared in the past fighting game who are excessively exposed. "Quiet" who doesn't have a word will be teased in the story as well. (Cont)

(Cont) But once you recognize the secret reason for her exposure, you will feel ashamed of your words & deeds.

Well, Metal Gear Solid V is out now, and we have the scientific explanation for Quiet’s skimpy outfit. Is it time to “feel ashamed of your words & deeds” after being so judgmental about her appearance?

Get ready for this, because according to Kotaku, “She breathes through her skin, using photosynthesis to absorb air, water, and nutrients.” This is because her body is infested with parasites. Parasites that also prevent her from speaking.

You’ve got to hand it to Metal Gear Solid V for dreaming up such an original excuse to include scenes like this one, where Quiet writhes around in a cage while two dudes discuss her bodily functions. Sample dialogue: “She uh… refuses to wear clothes. The last staff member who tried to dress her is breathing through tubes.”

Honestly, it would have been simpler for the people behind Metal Gear Solid V to just admit thatQuiet looks like this for the titillation of the people they believe to be the game’s target audience.

The parasite backstory is so transparently silly that it’s almost worse than no explanation at all. Especially when this kind of “human photosynthesis” concept only ever leads to nudity for female characters. Just look at the difference between the DC Comics superhero Starfire, and her male counterparts Superman and Apollo. Each of these characters absorb solar energy through their skin, but only one of them spent years being drawn in a weird assortment of nipple-covers and thigh-high boots.