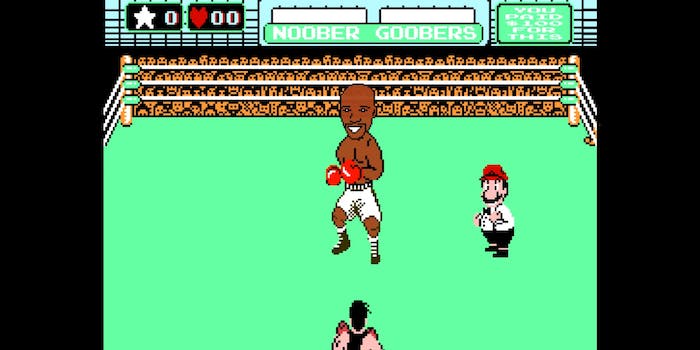 The Mayweather/Pacquiao fight is way better in Nintendo’s Punch-Out!!

Floyd Mayweather beat Manny Pacquiao on Saturday night in a much-hyped boxing match in Las Vegas. Fans and the press on Monday have decreed the fight a boring waste of time and money, and YouTube channel Noober Goober Gaming decided to commemorate the event by simulating Mayweather/Pacquiao in the Nintendo Entertainment System version of the classic game Punch-Out!!

Mike Tyson’s Punch-Out!! was released for the NES in 1987. It was a game about learning and exploiting your opponent’s patterns, like knowing when to read that an uppercut was on the way, and timing your dodge correctly to immediately hit back at your defenseless opponent.

Floyd Mayweather Punch-Out!!! is also about recognizing patterns, for instance that pay-per-view boxing has for years been way too expensive for how uneven the product is, and that the boxing world is terrible at consistently matching up fighters properly to make sure fights are exciting.

Also, keep in mind that the Punch-Out version of the Mayweather/Pacquiao was created before the fight took place, making it prophetic as well as hilarious.

If you’d prefer to pay a reasonable price for a quality product, Punch-Out!! Featuring Mr. Dream (Nintendo’s license for Mike Tyson’s likeness has long since expired) is currently available for $4.99 on the Nintendo eShop. That, unlike the Mayweather/Pacquiao fight, represents a good value proposition.