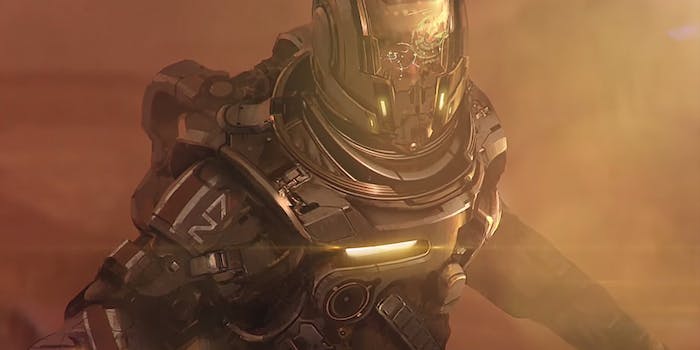 Fans aren't sure what to make of this.

BioWare chose to court controversy at the SDCC 2014 panel “Charting a Course: Developing the Next Mass Effect” by announcing that the forthcoming game in the series won’t feature beloved hero Commander Shepard, and that the hated Mako ground vehicle from the original Mass Effect will return. Fans were both delighted and disgusted.

Mass Effect fans do actually have a love/hate relationship with the six-wheeled Mako and the slow, planetary exploration missions for which it was used in Mass Effect. Nothing could ever top the opinionated, vociferously-argued love/hate reactions for the ending of Mass Effect 3, however.

Fans have been dying to know how BioWare plans to follow up that performance. It’s unsurprising, then, that the loudest speculation to come out of BioWare’s Mass Effect panel at SDCC 2014 is about when and where the story takes place.

According to coverage from The Escapist, BioWare unfortunately gave no details about how the story in the new Mass Effect game will relate to the story of the existing Mass Effect trilogy. BioWare only shared that the new story will not intersect with the existing tale of franchise hero Commander Shepard.

BioWare says the new Mass Effect game, which is being developed at studios in Edmonton and Montreal, Canada is still years away. Let the wild guessing about the story commence.

Most of the concrete information shared at the SDCC 2014 Mass Effect panel was about the Mako, and why BioWare is bringing the vehicle back. Exploration will be more of a focus in the new Mass Effect game, such that players will be spending a lot of time in ground vehicles.

Players will be able to customize their Mako, which BioWare promises will be a much more responsive vehicle compared to when the Mako made its first appearance in Mass Effect. That’s not saying much, however, depending on who you ask.

H/T The Escapist | Screenshot via GamesHQMedia/YouTube