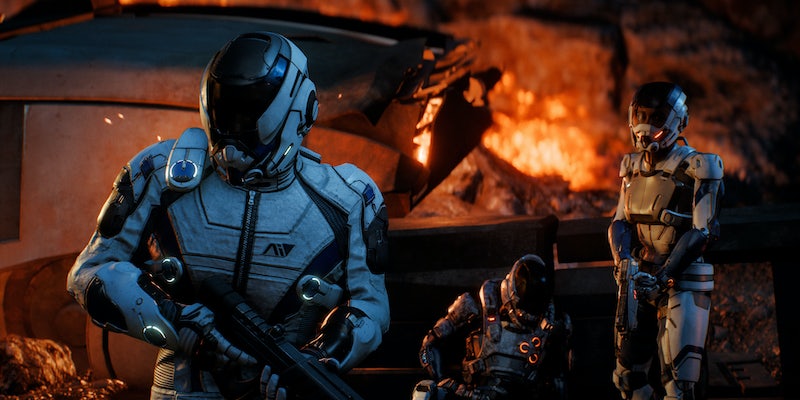 In many ways, this new chapter fails to live up to its predecessors.

Just a few hours into Mass Effect: Andromeda, things don’t look promising for the future of humanity. A scourge of mysterious energy has soured the far-off planets once thought to be hospitable, several ships housing colonist species have gone missing, and a hostile race threatens the safety of this new galaxy. As Pathfinder, it’s up to you to solve all of this.

Andromeda picks up more than 600 years after the events of the original trilogy, but is far removed from the specifics of the controversial ending of Mass Effect 3. This mission follows an initiative of explorers eager to scrub a new galaxy for planets to settle. Something great about Andromeda’s story is the sense of optimism defining the core objective as early as the opening cutscene. This team isn’t running away from an oppressive threat or exerting their military prowess in a flashy show of gigantic ships strapped with guns. Instead, the cast of characters are driven by a passion for science and research. You can even enter the very first combat encounter with the villainous Kett hands in the air, opting to come in peace.

Humans are the aliens in this galaxy, and this makes for a wondrous feeling of discovery as both the player and their avatar react to some of the more fantastical elements of the new worlds they discover. In just the first few hours, I was marveled by massive space whales off in the distance, glowing vegetation hidden in an underground cave, and ancient geography spouting out from a barren desert. Ryder, the player character whose gender is left up to the player, is out of their element in a way we never saw Commander Shepard. Andromeda doesn’t waste much time getting the plot moving and sending the player out to explore unfamiliar territory.

Still, the challenge to find humanity’s new home doesn’t bear down the open-world exploration with a dreadfully dour tone. Each planet has a larger map than those of the original Mass Effect trilogy, and you can often complete multiple missions in one visit. Several of the franchise’s defining features are present, like romance options, loyalty missions, and problem-solving side quests. One big change is the absence of binary Paragon or Renegade options in dialogue. Instead, Ryder can choose from a spectrum of responses that utilize factors like emotion or logic, based on the given situation. In turn, the choices you make are shape Ryder into a dynamic character, rather than filling up an arbitrary experience bar.

Likewise, the role-playing mechanics have been extensively overhauled in a way that suits the “choose-your-own-adventure” trappings of the narrative. Rather than being locked into a class from the start of the game and having over half of the unique powers exclusive to other playthroughs, Andromeda opts for a malleable system that allows you to access any equipment or ability you could want. By pouring points into Combat, Biotic, or Tech progression trees, Ryder can unlock “profiles” that open up new tactics to use in battle. You can swap between these profiles on the fly, and the game isn’t shy about dishing out experience points to experiment with new bonuses.

These abilities offer empowering options to change up enemy encounters, but combat tends to be a constant headache in Mass Effect Andromeda. There’s a remarkable amount of guns to choose from, but enemies soak up bullets regardless of what you shoot them with. The A.I. is smart enough to flank you and respond to your abilities, but your toughest opponent is likely going be the terrible auto-cover system. Approaching any sizable wall with your weapon drawn causes Ryder to crouch down next to it, often obscuring most of the camera’s vantage on the battlefield. Rather than sticking to cover with a bulky feeling like Gears of War, you slide around in a frustrating frenzy that often leads to several unfortunate failures.

More gameplay issues plague the overall experience, including rigid character animations and downright nightmarish facial close-ups. On this front, the visuals are indistinguishable from the look of Mass Effect 3 in 2012. However, Andromeda’s alien environments and sweeping sci-fi landscapes are colorful and detailed, though enemies and structures often pop in unannounced. Load times can drag when traveling between your ship, the Tempest, and the Nexus, a central hub for socializing with NPCs. The worst offender here is in scanning planets, where you are queued for a solid minute when jumping between locations ultimately lacking in resources or anything worthwhile.

In many ways, Mass Effect Andromeda suffers from an identity crisis. By fervently distancing itself from a beloved storyline plotted over the course of three long games, Andromeda asks a lot when building up its cast of new characters outfitted in that same Mass Effect aesthetic. But none of the personalities in this entry are direct analogues to those of the original trilogy, and getting to know what defines each individual is one of Andromeda’s delights. When embracing classic, schlocky sci-fi influences like Star Trek’s original series, the writing poignantly meditates on humanity’s enduring desire to get out and explore the cosmos. Shooting sections tend to be mechanically lifeless and contrast the pacifist leanings of the Andromeda Initiative’s core principles so much so that I often wished the game was more like No Man’s Sky in encouraging aimless cultivation.

Several gameplay mechanics don’t make a good first impression, but improve as you acclimate. Ryder’s long jumps and quick dashes complement the traversal-ready Nomad in preparing the player to explore as many of the alien worlds as they can find, even if they know a corridor full of moving targets is waiting at the end of each mission. Still, the worlds you visit feel appropriately scaled and populated with points on the map to investigate and clear out. Instead of one massive area to thoroughly survey, you are presented with a good number of regional segments to discover. Each new planet tends to be full of the same content, including repetitive enemy outposts and frustrating alien Sudoku puzzles. The feeling of amazement at a new climate or wondrous vista only lasts a few moments before the journey once more becomes mundane.

It’s a shame that the central narrative of Mass Effect Andromeda is deflated by this burdensome gameplay, because the crew of the Tempest is worth meeting. The mystery of the Kett is a fresh spin on the apocalyptic war of the original trilogy, and following the stories of people in the Heleus cluster often leads to surprising developments with tough decisions waiting at the end. Ryder’s tale and the thrill of colonizing a new star system set Andromeda apart from other Mass Effect games, but it often plays worse than a game from five years ago.

Disclosure: This game was reviewed on Xbox One with a copy provided by the publisher.