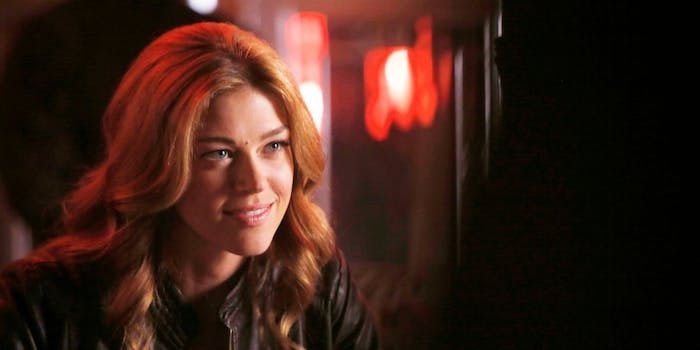 ABC orders a pilot starring Mockingbird from ‘Agents of S.H.I.E.L.D.’

Is it enough to stand out from the crowd?

Agents of S.H.I.E.L.D. fans who were disappointed when Marvel decided to drop a Mockingbird spinoff back in May are about to get an early Christmas present.

Variety is reporting that ABC has ordered a pilot for a show centering around Mockingbird called Marvel’s Most Wanted. It’ll star Adrianne Palicki and Nick Blood as Bobbi “Mockingbird” Morse and Lance Hunter respectively—the same characters they portray on Agents of S.H.I.E.L.D.—and will zero in on them and their adventures in the field.

People with knowledge of the project aren’t calling it a spinoff but instead “an entirely new project solely focused on the two characters to continue their story.” There’s not much other information available such as whether the concept could be introduced in an episode of Agents of S.H.I.E.L.D.—of which both Palicki and Blood will appear.

Of course, just because a show is getting a pilot doesn’t mean that it’s a guarantee that it’ll receive a series order. ABC executives might not like what they see, and with both Agents of S.H.I.E.L.D. and Agent Carter on the air, it’d be the third Marvel series to air on ABC. (ABC and Marvel Studios are sister companies owned by Disney.) And that’s not including the super-secret project John Ridley has in the works with Marvel.

Meanwhile, fans are torn. Many of them adore Mockingbird and what she brings to Agents of S.H.I.E.L.D., but they’re split on her character getting her own pilot.

It's not for me & I'm wary that the #MarvelsMostWanted series will overtake AoS but good on Marvel for spotlighting Mockingbird. Deserved.

Of all the characters I'm not keen on being spun off #MarvelsMostWanted #MAoS https://t.co/fRVaUWQsja

But in a sea of superhero shows across five networks and Netflix (so far), Mockingbird might not stand out as much as it hopes, especially with two other shows about agents of secret government organizations that interact with and fight against aliens, secret evil organizations, and sometimes even each other. In Marvel’s case, since they’re all in the same universe, that’s one more show to watch.

Still, it’s a show that would star a female superhero, and one who is a favorite of Marvel’s most popular series.

You cannot tell me that girls would not watch a Ms. Marvel show I refuse to believe it

Debuting last February, Kamala Khan’s Ms. Marvel is already one for the history books. With its first issue getting a rare sixth printing, Kamala offers rich storytelling and some much needed diversity in a TV universe that’s more diverse than its movie counterpart (but still could do better). She’s smart, funny, relatable, and a total fangirl—winning the love of fans from the get-go.

As of right now, Supergirl and AKA Jessica Jones are the only shows featuring main female characters with superpowers in their comic origins.

While it doesn’t appear that Ridley is making a Ms. Marvel TV show, it’s something that might be more realistic in a TV format; we won’t be getting a superhero starring someone who’s not a white male until Black Panther in November 2017, and recent studies have shown that Hollywood still very much has a diversity problem.

She’s the first Muslim American superhero, and that aspect of her family life is addressed as Kamala has to juggle her secret identity as well as her family and religious values. (In an early issue it’s her Imam at her local mosque she opens up to about parts of her double life and how to handle those values that contradict themselves.) And in an industry where many Muslim American actors are being typecast as terrorists, it’s a chance for them to be up for and play complex characters.

The comic sets up is that Kamala is an Inhuman, exposed to the same type of Terrigen mist that Agents of S.H.I.E.L.D.’ Skye encountered in the show’s second season. But we learn in the finale that the broken Terrigen crystals have been turned into fish oil pills, meaning that we’re going to soon have a lot more Inhumans on our hands.

For now, we’ll have to wait and see whether Marvel’s Most Wanted makes it to our TVs and whether Mockingbird and Hunter’s story is compelling enough for its own show. And although Kamala is only going to be in an animated Avengers series, we can always hope she’ll make it to the screen one day.