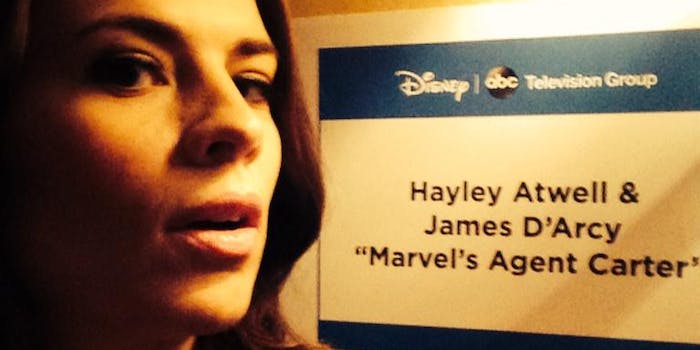 They're talented and hilarious.

For TV stars, there’s nothing quite like meeting the press at the Television Critics Association’s annual press tour. Who knows how many interviews you’ll have to do from a hotel room over the course of 24 hours? In between those interviews, of course, there’s the waiting. On Wednesday, which was ABC’s press day on the 2015 TCA Press Tour, several of Marvel‘s television personalities passed the time by tweeting adorable pictures.

It seems to have begun with Agent Carter star Hayley Atwell, who is well known for her lively Twitter account.

And here’s Atwell with her co-star James D’Arcy, who plays Edwin Jarvis.

Then things got silly. You can see Enver Gjokaj, who plays SSR Agent Daniel Sousa, in the background.

Perhaps sensing that the Agent Carter gang was having all the fun, Agents of S.H.I.E.L.D. star Chloe Bennet jumped in with her own snapshots of the day.

For actors like Atwell and Bennet, this is just part of the job. For us, it’s a chance to peek behind the curtain and see the stars of our favorite TV shows behaving, well, like normal people.

For more photos like these from the TCA event and their everyday lives, be sure to follow Atwell, Bennet, Wen, Gregg, and their co-stars on Twitter.