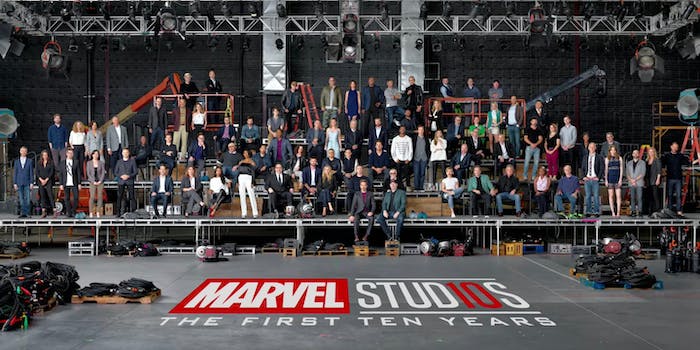 Marvel Studios is celebrating 10 years of cinematic domination this year. To mark the occasion, it united almost every major actor and director from its extensive lineup for one epic class photo.

Although we’re now at the point where Avengers: Infinity War, the end result of 18 films of setup, it’s easy to forget just how massive the MCU is—at least until you get most of them in a room together. By Marvel’s tally, 79 people gathered for the photo back in October, which served as a who’s who of Marvel. Front and center are Marvel Studios head Kevin Feige and the MCU’s original star, Robert Downey, Jr., but if you look closer you can spot everyone from Chris Evans, Brie Larson, Taika Waititi, and Jeff Goldblum to Chadwick Boseman, Hayley Atwell, Vin Diesel, and Don Cheadle.

10 years in the making. pic.twitter.com/eKCJuQJNOq

Even the behind-the-scenes video from Marvel that debuted the class photo felt like a giant class reunion.

The untitled fourth Avengers movie will end the MCU as we know it, but we can only imagine how much bigger this picture will be if Marvel brings everyone back for its 20th anniversary.