Marvel’s Star Wars fills in the gaps between A New Hope and The Empire Strikes Back.

By the time the second Star Wars trilogy wrapped in 2005, it was apparent not even George Lucas could do George Lucas anymore. Fortunately, writer Jason Aaron and artist John Cassady have achieved what Lucas couldn’t. They’ve made Star Wars interesting again in its debut return to Marvel after being licensed to Dark Horse Comics for more than 20 years.

In a nice homage to the original trilogy (and perhaps Spaceballs), Aaron and Cassady open with a familiar sight: the underbelly of a spaceship as it flies overhead. The ship, bound for a munitions plant on Cymoon 1, carries an emissary from Tatooine—and we all know it’s not Greedo.

The action quickly moves planet-side, where Imperial stooge Aggadeen impatiently waits for the craft to land. While I was expecting Jedi noob Luke Skywalker to come bounding down the ship’s gangplank, it’s actually intergalactic rapscallion Han Solo who appears.

Everyone’s favorite space pirate is posing as an official representative of Jabba the Hutt, who’s seeking to secure a trade deal with the empire. Unknown to “Aggie,” Han and company intercepted Jabba’s real negotiator so the rebels could gain access the galaxy’s largest weapons plant. 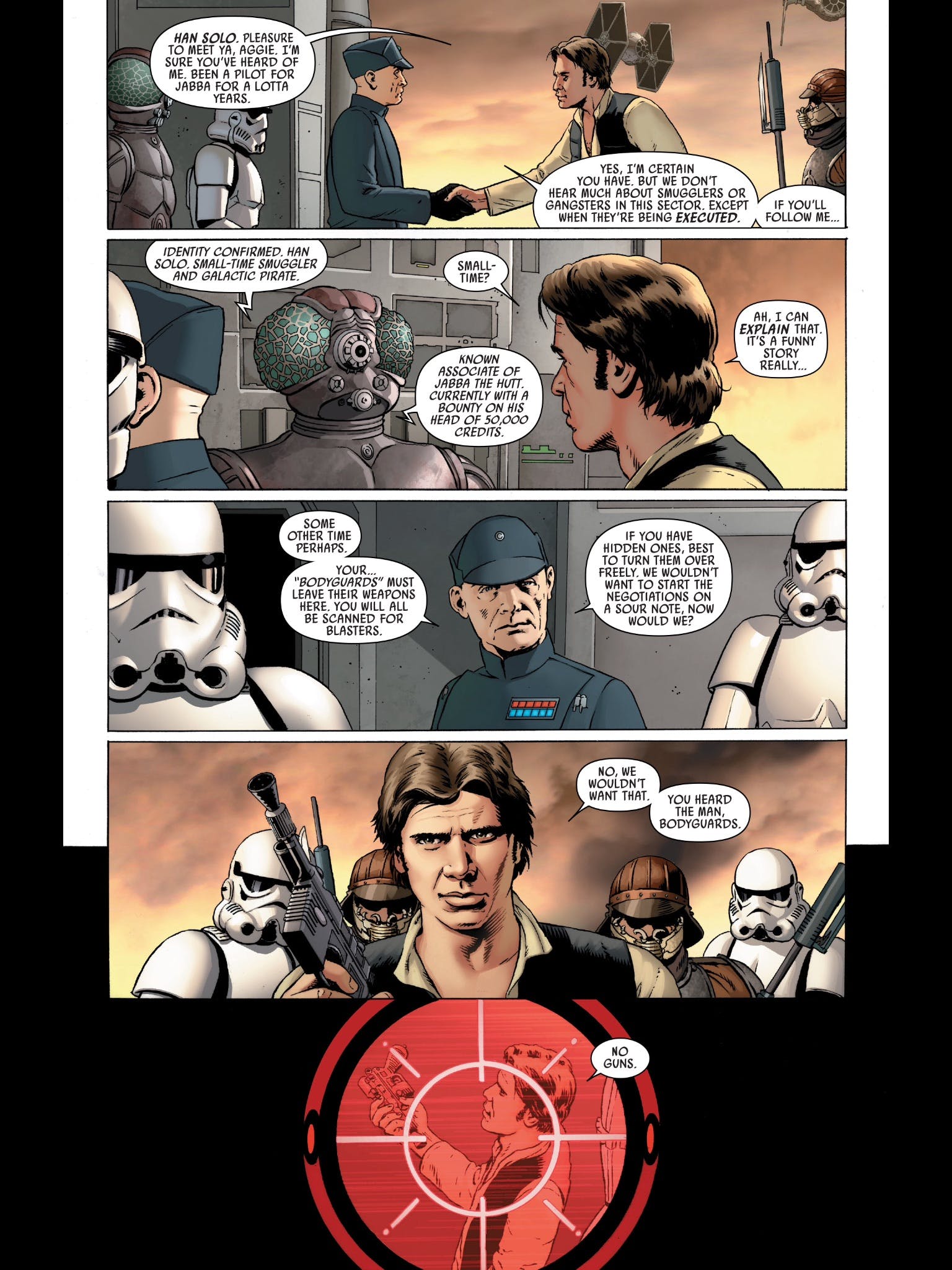 Typical of any Star Wars story involving Han, Chewbacca and the two droids, hijinks ensue. When the Millennium Falcon fails to start in time to rescue our heroes from a sticky situation—surprise, surprise—it means almost everyone’s on their own. The book ends with C-3PO trying to defend the inoperable ship from scavengers, Han and Leia attempting to sneak out slaves, and Luke running from Darth Vader.

Though less happened than in your average episode of Clone Wars, it was great to see these characters embark on a new adventure. Cassady pretty much nailed the actors’ likenesses and Aaron really got their voices right. Just try to read C-3PO’s dialogue and not hear Anthony Daniel’s clipped British accent in your head. Ditto with Han and Harrison Ford’s droll delivery.

Even naïve Luke has a great line, a humorous riff on “These are not the droids you’re looking for.” There’s a bit of foreshadowing, too. While liberating the factory’s oppressed workers, young Skywalker kicks into badass Return of the Jedi mode and lops off a guard’s hand. I must admit it gave me a bit of a thrill. As did seeing star destroyers, TIE fighters, Mon Calamaris and Kowakian monkey-lizards. 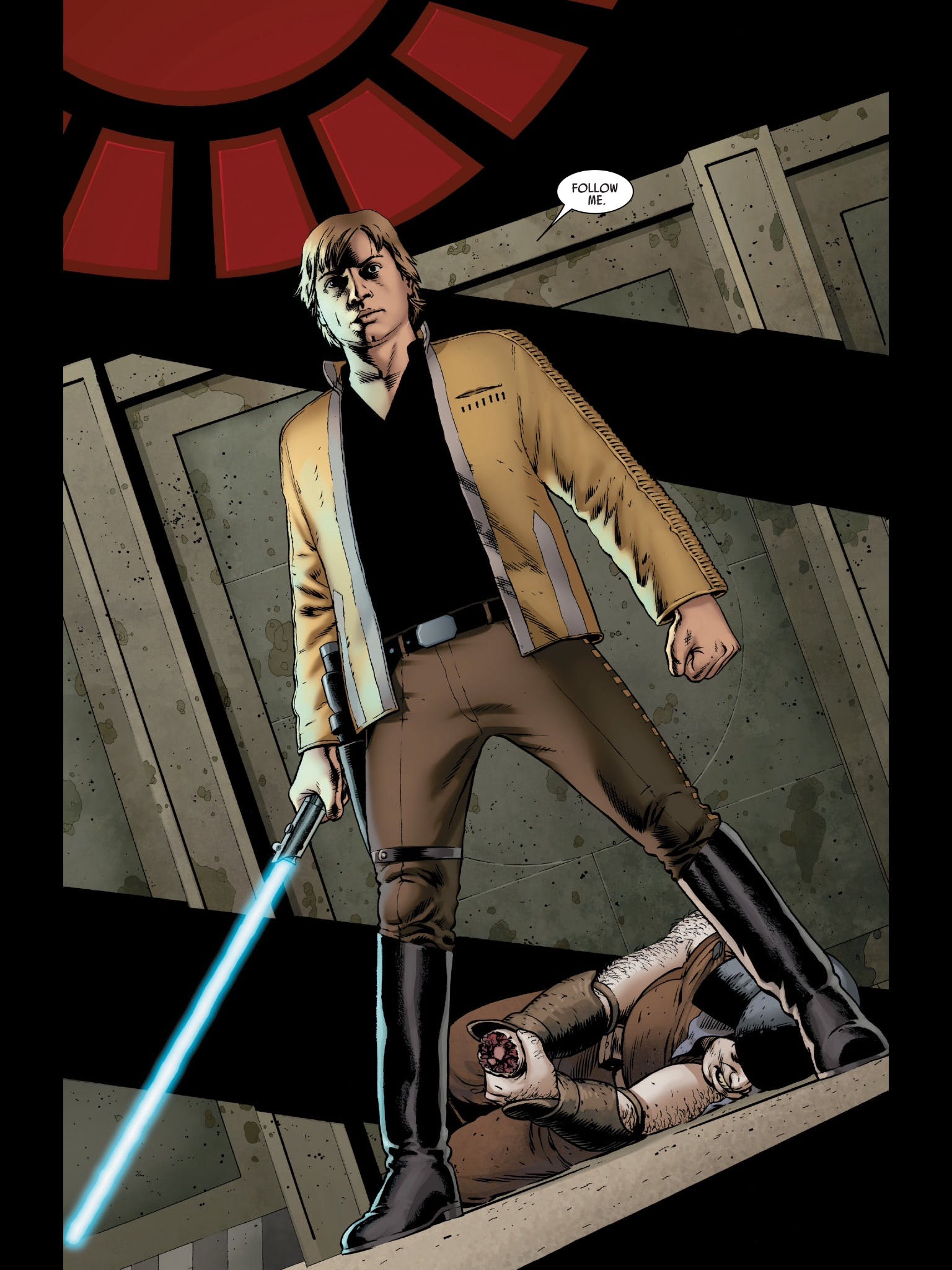 This version of Star Wars got me excited for the next installment, something The Phantom Menace just couldn’t do. I can only hope The Force Awakens will leave me feeling the same way.