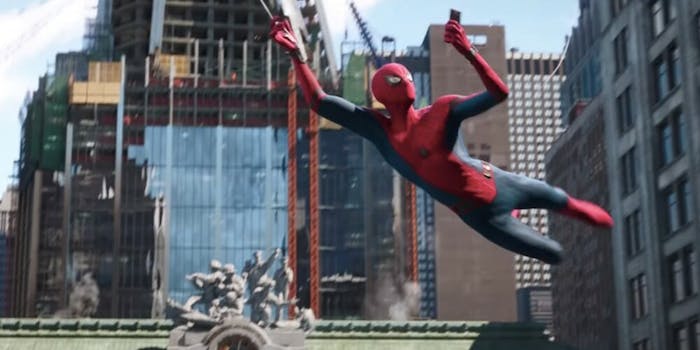 People are reacting with anger, sadness, and memes.

Reports surfaced on Tuesday claiming that Marvel Studios President Kevin Feige won’t be producing any more Spider-Man movies after Sony Pictures and Disney were unable to come to an agreement that would have given Disney a co-financing stake.

Sony released a statement late Tuesday, confirming that the dispute was specifically over Feige producing future Spider-Man films: “We are disappointed, but respect Disney’s decision not to have him continue as a lead producer of our next live action Spider-Man film. We hope this might change in the future, but understand that the many new responsibilities that Disney has given him—including all their newly added Marvel properties—do not allow time for him to work on IP they do not own. Kevin is terrific and we are grateful for his help and guidance and appreciate the path he has helped put us on, which we will continue.”

This makes it clear that Sony will continue making movies with Tom Holland, continuing the creative vision of the first two films. And even if Feige doesn’t produce the next Spidey film, this doesn’t automatically preclude the possibility of Tom Holland showing up again in the MCU—that depends on whether Disney ultimately cuts off this business partnership.

On Tuesday, a Sony representative told io9 that negotiations haven’t yet ceased, and the dispute is over a producer credit.

Update: A Sony rep told us it’s their belief this dispute is simply over a producer credit and negotiations are ongoing. They further clarified Feige has contributed to other Spider-centric movies that he did not receive a producer credit on. https://t.co/IwwnqBOJ7S

It was initially reported that Disney asked for a 50/50 financing deal for future Spider-Man films, but Sony turned it down. Sony wanted to keep the current deal, in which Marvel gets a percentage of the revenue produced on the first day of the movie’s release.

Sony has always owned the rights to Spider-Man but loaned the character to Marvel, which created several hugely successful movies and a multi-billion-dollar franchise.

Feige produced the most recent Spider-Man installation Spider-Man: Far From Home, which was a box-office success. This week, it became Sony’s highest-grossing film.

Two Spider-Man movies are in production right now, but Feige, who has produced numerous superhero hits including several of the Spider-Man movies, will not be the lead producer for these films.

Needless to say, if Spider-Man’s time with MCU is truly over, people are upset. Many believe that Spider-Man films simply won’t be the same without Marvel, so they’re not too happy with Sony.

“Sony is going to screw up ANOTHER Spider-Man franchise wow… they acting as if the MCU didn’t just give them their first $1B movie. Well in that case, you can count me out,” one Twitter user wrote.

Another joked that the next installment should be titled, “Spider-Man: Homewrecker.”

sony looking at their stocks plummeting after all this bullshit#Sony #spiderman pic.twitter.com/Xs8zTD21WV

Others are just plain sad, citing Tom Holland’s lauded version of the character.

THE FUCK YOU MEAN SPIDERMAN IS OUT OF THE MCU??? TOM HOLLAND DID NOT WORK THIS HATD ONLY FOR THIS TO HAPPEN ITS ON FUCKIN SIGHT SONY pic.twitter.com/rjJkDG9OI5

i don't think sony understands how much i need tom holland as peter parker in the mcu pic.twitter.com/qKaNSAW2Xo

tom holland deserves better than this. it was his childhood dream to be spider-man and to be apart of the mcu and now it’s all ruined. fuck you sony #SonyIsOverParty pic.twitter.com/9LaBJDQp34

sony and disney watching all of us get angry about spider-man not being in the mcu pic.twitter.com/AYYS7my5Pa

Republican or Democrat I think that we can all agree the biggest let down in American history is this. #Spiderman pic.twitter.com/mIibgvSdZX

disney and sony fighting over who gets to keep the rights to spiderman: pic.twitter.com/Pjqw5IaYl6

HOW COULD YOU SPLIT UP SPIDER MAN AND IRON MAN AGAIN THEY’VE BEEN THROUGH ENOUGH pic.twitter.com/zLFqF9AtUX

Michelle Jaworski contributed to this story.