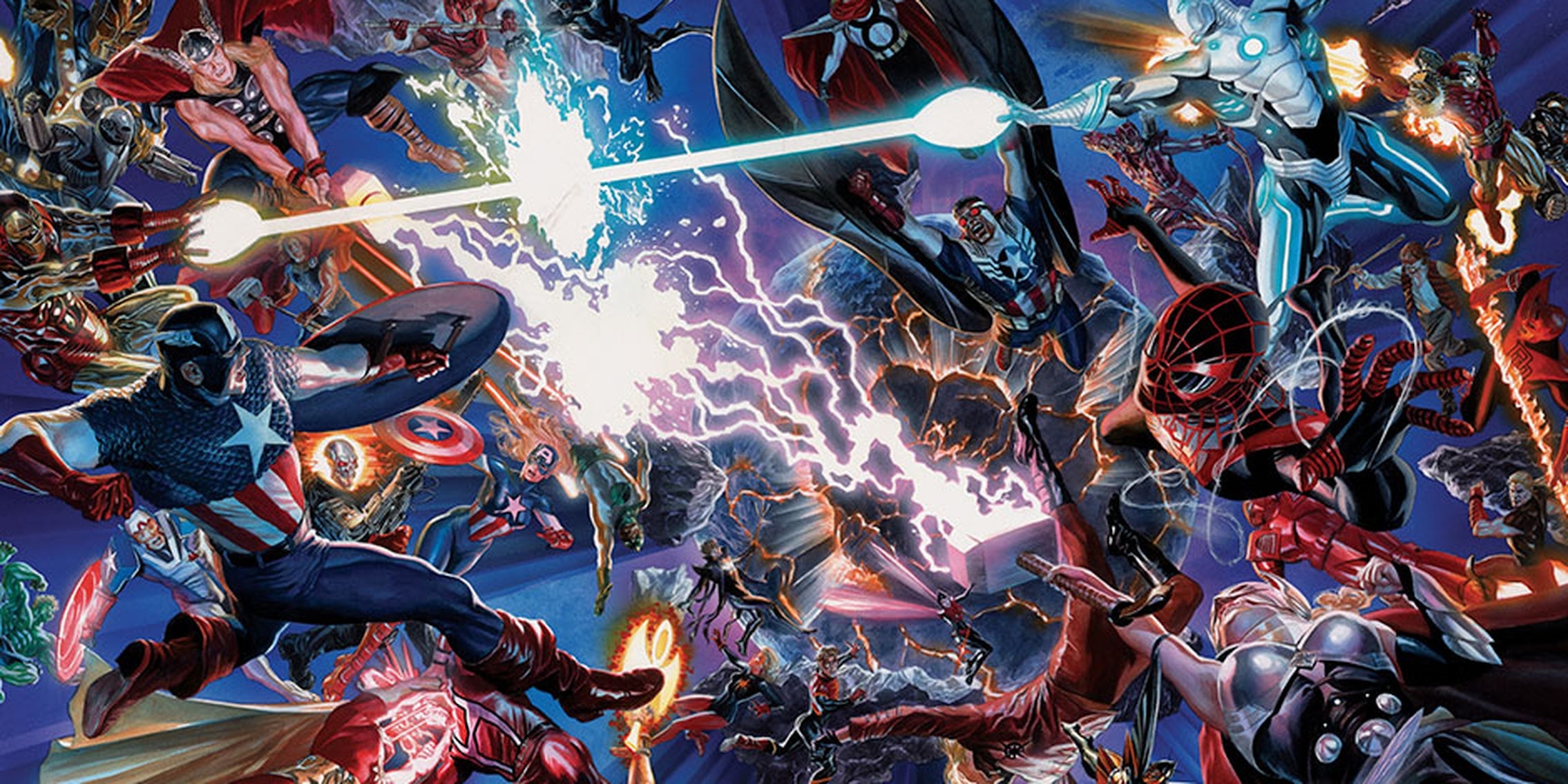 Here’s how Marvel is about to make comic worlds collide

Marvel's comic book universes will smash together in the Battleworld of 'Secret Wars.'

On Tuesday night, Marvel livestreamed a press conference dedicated to Secret Wars, its latest big comic book event. Many viewers left the livestream more confused than they were before, but don’t worry, Secret Wars is less complicated than Marvel made it sound. Fortunately.

Secret Wars is basically a reboot of the Marvel comics universe, although they’re oddly reluctant to use the word “reboot.” An eight-issue miniseries will see Earth 616 (the main Earth setting of Marvel Universe comics) collide with the Earth of the Ultimate Universe. Here’s how Marvel Editor-in-Chief Axel Alonso explained it, using a bizarre food analogy:

Some fans are already concerned that the “pizza toppings” that are going to drop off are recently rebooted characters like Miles Morales as Spider-Man, and the female version of Thor. Will some of these superheroes revert back to their original white male identities, undoing the recent steps Marvel has taken to diversify its lineup? It seems unlikely that Marvel will drop a popular character like Miles Morales, but others are not quite so safe.

As for the collision between the two universes, that takes place in “Battleworld,” a setting that will feature heavily in Secret Wars-related comics. Marvel revealed an interactive Battleworld map yesterday, which proved so popular at first that the site crashed. However, the overall concept of a large-scale reboot is not getting a very warm reception.

Marvel running around this week yelling "Our Universe isn't Broken!" & All I'm hearing is "BattleWorld is How We Will Break It." #Secretwars

This whole #SecretWarsLive crap at #marvel sounds too much like a DC event. Less of a story. More of an editorial decision for a reboot

This Marvel "Battleworld" stuff has me extremely worried.

The title Battleworld isn’t for everyone, but if you see people panicking that Secret Wars will somehow “ruin Marvel,” don’t get too concerned. This isn’t the first time DC or Marvel has rebooted their comic book universe, nor will it be the last. Also, Secret Wars has been in the works for a long time, having been discussed at the last few creative summits for Marvel’s top writers. They’re not just dropping it in out of nowhere.

As is often the case with event comics, Secret Wars aims to simplify a world of disparate storylines that have—supposedly—become too complicated. Also, Marvel wants to sell more comics and merchandise, and this kind of highly publicized event is a good way to do that.

Once the dust has settled, a fresh(ish) Marvel universe will emerge from Battleworld, including several new titles. If you want to get into Secret Wars at the beginning, Marvel is making things easy with an introductory comic on Free Comic Book Day on May 2. Otherwise, there’s the tried and true option of just ignoring the whole thing and Wikipedia-ing the outcome a few weeks later.