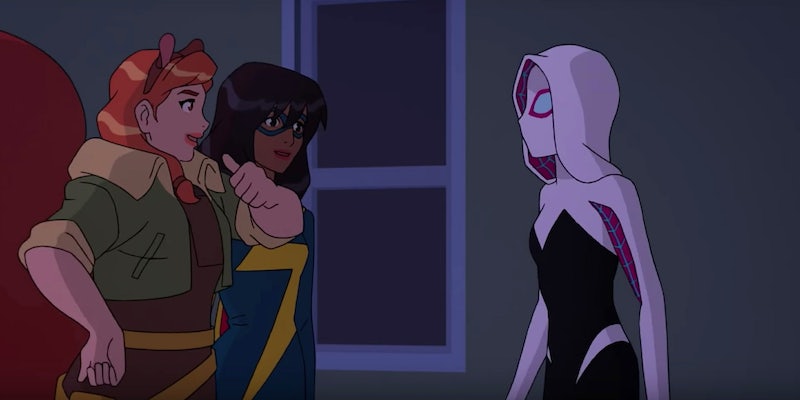 Ms. Marvel, Squirrel Girl, Quake, and more will work together in this new series.

Many of Marvel’s superheroes are teaming up for a brand new venture both on the page and the screen.

Marvel is launching Marvel Rising, a new series that will star several Marvel heroes including Ms. Marvel, Squirrel Girl, Ghost-Spider (who comic fans will know as Spider-Gwen but this take on the character has “acquired spider powers”), Quake, Patriot, and Inferno. Marvel Rising will consist of animated shorts and a TV movie tie-in comic book series, the first of which features a team-up between Kamala Khan and Doreen Green coming out Aug. 1.

The animated shorts, titled Marvel Rising: Initiation appear to be in a similar vein to Star Wars Forces of Destiny, which largely focus on Star Wars’ female characters across the galaxy. The TV movie, which doesn’t have a release date but is set to premiere in the fall, will see Marvel heroes come together after Ghost-Spider is framed for the death of a friend—first, to take Ghost-Spider down, but eventually to face an even bigger foe. Much of the story—particularly between Kamala and Doreen—will be fueled by female superhero friendships.

Marvel also revealed who’s voicing the main cast. Chloe Bennet is voicing her Agents of S.H.I.E.L.D. character Quake, and Milana Vayntrub, who was cast as Squirrel Girl in New Warriors before it was shelved by Freeform, is on hand to portray the character once again. Other cast members include Dove Cameron as Ghost-Spider, Kathreen Khavari as Ms. Marvel, and Kamil McFadden as Patriot.

Marvel Rising is an effort by Marvel to cater to female fans with an inclusive selection of superheroes, many of whom were introduced or brought back through their own series or—in Quake’s case, Agents of S.H.I.E.L.D.—in the past few years. With the exception of Patriot, all of the characters in Marvel Rising are young women. In the process of creating Marvel Rising, Marvel SVP of animation Cort Lane said he talked to fans to see what they wanted in a show, which included several girls requesting “different body types.”