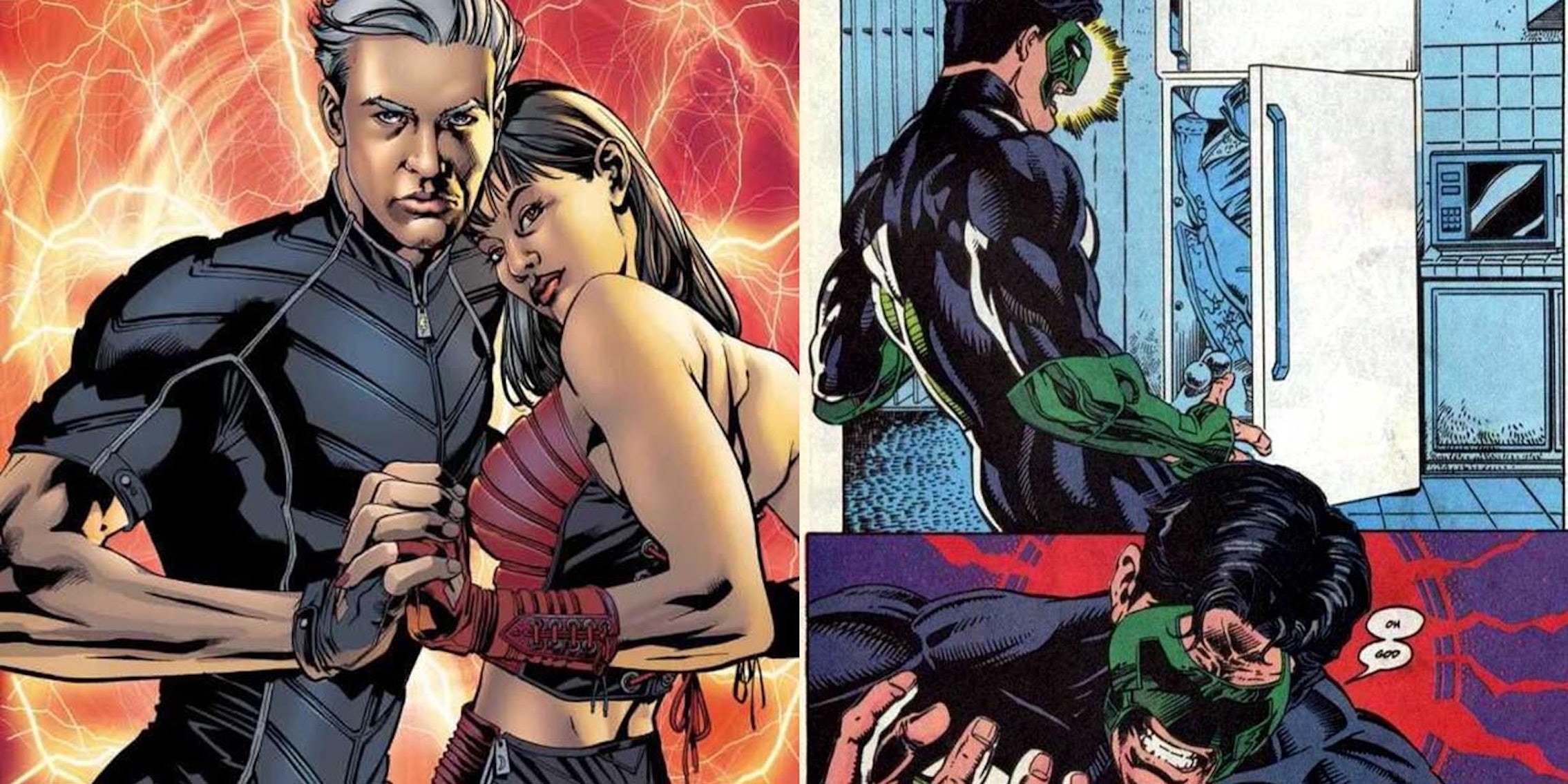 These storylines have not aged well.

Superheroes are all the rage right now, thanks to the wonderful comic book adaptations studios have been pumping out. Hits like Black Panther and Captain Marvel introduced the world to superheroes once only appreciated by the niche community of comic book fans.

Phase 4 of the MCU promises plenty of new superheroes, many of whom are even more obscure than the Guardians of the Galaxy or Doctor Strange. DC has big plans for the next few years as well, promising fans a slew of superhero-centric films and series to enjoy. While creators have literally thousands of options of excellent storylines to adapt from beloved comics, there are a few stories they should probably avoid. We have nothing but respect for the writers and artists who gave us all of our favorite heroes and villains, but every once in awhile, Marvel and DC writers published stories so off-color they could never see the light of day in 2019. Here is our list of eight Marvel and DC stories that will make you ask what the hell these writers were thinking.

Considering that most popular heroes and villains were originally thought up between the ’40s and ’70s, it’s no surprise that some early comic book storylines haven’t aged well. We had different standards back then, and what offends in 2019 certainly didn’t in the silver age of comic books. Even considering when some of these stories initially published, however, it’s hard to imagine what the writers and artists behind them were thinking. Topics like fat-shaming, racism and sexual abuse were far too common in comics for years. Its no surprise that these subjects are off-limits nowadays, but even when they first published, these storylines raised eyebrows.

There was a lot of racism in early comics. Thankfully, in some cases, this led to companies examining their content and often bringing in a more diverse writing staff. Unfortunately, this path to diversity was often a rocky one. Superman comics, in particular, have a long history of problematic storylines. There was the time that Superman got hit by “pink kryptonite” and briefly went gay. Or the time Lois Lane and Lana Lang tried to brainwash a toddler version of Superman into marrying them. There are too many examples for me to list here, but you get the point.

But perhaps the worst decision DC made was its Black Lois Lane storyline. Back in the ’70s, DC published a comic in which Lois Lane, in order to report on African-American life, decided she needed to be Black herself. Using crazy Kryptonian tech, the white reporter managed to transform into a Black woman for just enough time to thoroughly offend readers. Though Lois did walk away with a lesson or two about race and inequality, this cringe-inducing storyline was exactly the wrong way to communicate the message. Lois was far from the only character in a comic to use blackface, however. The Hulk—yes the Hulk and not Bruce Banner—and the Punisher are both guilty of similarly painful storylines.

Another gem from Superman’s painfully problematic history came when, in the ’50s, writers decided to reinforce exactly how much of a dick Superman really is. After witnessing what she believed to be a murder, Lois went to the police but was unable to identify the killer. After being hit by a growth ray, Lois woke the next day to find that she had increased by several dress sizes.

This horribly awkward storyline was made all the worse by the unending fat jokes throughout the issue. The title itself, “The Fattest Girl In Metropolis,” will make you want to gag. Even more infuriating is Superman’s reaction to Lois after seeing her weight gain. While he doesn’t appear to recognize her, Supes, of course, ends up coming to Lois’s rescue on several occasions. When carrying her at one point, Superman huff and puffs and comments on how much of a “load” she is. This from a man who can lift planes and tear apart buildings.

The most terrible thing about the whole story? Superman was behind Lois’ sudden weight gain all along. While he intended the weight gain to be a “cover” for his favorite slender reporter, the Kryptonian douchebag then spent the entire issue poking fun at Lois’ situation. What an ass.

Pivoting back to racism, I give you perhaps the worst story pitch in the history of comics. The CW’s popular series Black Lightning debuted in 2018, but many people are unaware of how this character began. Back when DC was searching for a Black superhero to headline a series, several candidates were considered. While Black Lightning ultimately won out, DC came very close to introducing the world to the Brown Bomber instead.

The Brown Bomber was a white racist who, when under stress, transformed into a Black superhero. Given that he was a racist, the character was unaware of his superhero alter-identity. Oh, and each identity had its own racially appropriate girlfriend. This comic came very close to being published, despite comic historian Don Markstein later describing it as “an insult to practically everybody with any point of view at all.” Thankfully, the editor who approved the Brown Bomber character left DC and was replaced by Tony Isabella, who created Black Lightning. In case you were hoping to pop a blood vessel today, here’s one last tidbit: When he transformed into his Black super-persona, the Brown Bomber shouted “Black power.”

4) The woman in the fridge

Taking a very different tone from the first three entries on this list, we have the murder and fridge-stuffing of Kyle Rayner’s girlfriend in Green Lantern. While this event was honestly pretty tame in comparison to some of the truly screwed-up moments in comic book history, it effectively created its own trope.

Returning to the home he shared with girlfriend Alex DeWitt after a long day of doing whatever Green Lanterns do, Rayner found a note inviting him to check the fridge. Likely expecting a special surprise, Rayner immediately went to the fridge and opened it. Inside, the corpse of his girlfriend was horrifically stowed alongside the milk and eggs. This grotesque storyline created the term “women in refrigerators” as a way to describe the needless violence that often descends upon female characters for the exclusive purpose of motivating a male character. Props for creating a new trope, I guess?

5) Green Lantern is, in fact, a child molester

Green Lantern gave readers another cringe-inducing moment when the original Green Lantern, Hal Jordan, decided to date a literal child. While the relationship was entirely consensual, the fact that Jordan was, at minimum, in his 30s and Arisia was a 13-year-old girl made their relationship 950 percent horrifying.

Arisia, an alien member of the Green Lantern Corps, began as just a teenaged helper to the adult Jordan. Arisia gradually formed a girlish crush on her mature mentor. While Jordan initially rebuffed her advances, he eventually changed his mind. What prompted him to go from relatively normal non-molester to the creepiest Green Lantern alive? Arisia’s use of her power ring to transform her body from that of a girl into that of a woman. Once she had all the bits Jordan was interested in, he quickly changed his tune. The two ended up dating for several years, with their sexual relationship often emphasized within the comics.

This may be the most well-known Marvel mistake on this list. For those who haven’t paid attention, X-Men characters Scarlet Witch and Quicksilver are the twin children of the mutant Magneto. They shared a close relationship throughout the comics, with some even hinting at a deeper connection, but for years nothing else came of it.

Then came The Ultimates 3. In this genuinely upsetting storyline, the Maximoff twins take their relationship to a whole new level. To be blunt: they have sex. A lot. Everywhere. And everyone knows and are entirely aware of how messed up it is. Despite its extremely unnecessary and disgusting contents, this comic made it all the way to print, and those who read it can never unsee the twincest.

Hoo-boy, we’ve reached the jaw-droppingly-awful part of this list. Go ahead and give that headline another read, and postpone the horrible explanation that is to follow.

In the early 1980s, Marvel decided it wanted Carol Danvers, who at the time went by Ms. Marvel, to have a child. There is nothing wrong with this idea on its face; after all, children are wonderful despite all the noise and mess. But it was the method through which Marvel writers decided to have Ms. Marvel become pregnant that really alienated fans.

A man named Marcus, who found himself trapped in Limbo, decided to use Ms. Marvel to gain his freedom. When Ms. Marvel rejected his advances, however, he rendered her unconscious and raped her. Later, Ms. Marvel found herself back on Earth and, to her surprise, almost three months pregnant. Over the next several days, nine months worth of gestation occurred, and Ms. Marvel gave birth to her rapist’s baby.

After the child was born, he rapidly aged up and was revealed to be none other than Marcus. Once grown, Marcus quickly proceeded to fall in love with his mother/victim. To make it worse, none of the Avengers seemed to think there was anything strange about his affections. Despite her initial horror at what had been done to her, Ms. Marvel eventually returned Marcus’ affections. Thankfully, this story was somewhat repaired by writer Chris Claremont a year later. Despite his efforts, this trainwreck of a story remains canon in the Marvel comic universe.

There is no shortage of rape in Marvel and DC history. In some cases, like Silk Specter’s rape at the hands of the Comedian in Watchmen, the rape served a narrative purpose, plus it was addressed as a horrific deed and condemned as such. Unfortunately, though, this act is treated like a commonplace, forgivable action far too often. Such was the case with the rape of Ms. Marvel, as it was in the case of Hawley Griffin, or the Invisible Man.

In 1999, Alan Moore and Kevin O’Neill launched The League of Extraordinary Gentlemen. Included among the team was Griffin, who turned himself invisible in the course of an experiment. Taking full advantage of his invisibility, Griffin made his way to the Correctional Academy for Wayward Gentlewomen, where he proceeded to secretly rape a number of women—resulting in three conceptions. During the course of one such rape, he was discovered and delivered back to the League. Selfish, still somewhat insane from his time alone and with an inflated sense of self-worth, Griffin eventually decided to betray his team and made an alliance with invading Martians.

It was after this betrayal that Hyde finally took his revenge. The other half of Robert Louis Stevenson’s Dr. Jekyll had the ability to see Griffin, thanks to his infrared vision. He waited for the Invisible Man to return and took his revenge by raping the man to death. While the majority of the act cannot be seen—given Griffin’s invisibility—he became visible again upon his death. Thankfully, his corpse was never shown. The bloodstains caused by Hyde’s assault were the only lingering evidence of what transpired, but still, good luck trying to sleep tonight.