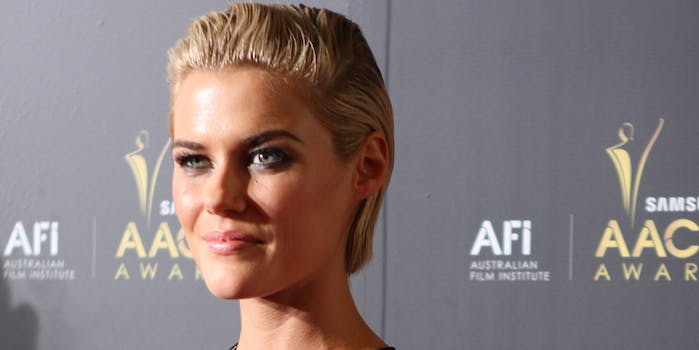 It looks like Carrie-Anne Moss is sharing a kiss with a woman in these 'A.K.A. Jessica Jones' pics.

Photos from the set of A.K.A. Jessica Jones reveal what may be the first same-sex couple in the Marvel Studios franchise.

The Daily Mail acquired behind-the-scenes photos showing actress Carrie-Anne Moss (The Matrix) sharing a kiss with a blonde woman. Moss plays a supporting character named Harper who was created for the show.

A.K.A. Jessica Jones stars Krysten Ritter as a former superhero who decides to become a private eye. The show is the second in a series of four Marvel/Netflix series beginning with Daredevil next month, featuring characters who will eventually team up to form the Defenders.

If these photos are what they seem to be, then Harper and her mystery woman will be the first canonical same-sex couple in the Marvel Cinematic Universe.

While Marvel has included queer characters in its comics for decades, its movie and TV output is considerably less progressive. Marvel Studios’ push for diversity is still relatively new; the company announced Black Panther and Captain Marvel movies for 2018 after a full decade of movies with white male leads. So far, the MCU has barely acknowledged the existence of queer people, never mind introducing a prominent character who isn’t straight.

It’s no great surprise that these photos come from a Netflix series. Big-budget movies are under pressure to be as conservative and risk-free as possible, and even Marvel’s comparatively low-profile TV shows have to deal with advertisers. A Netflix series has far more leeway to focus on obscure superheroes, include a more diverse range of characters, and tackle adult themes—although a same-sex kiss is hardly risqué material.

If these photos turn out to be the result of misleading camera angles rather than a real kiss, then a lot of Marvel fans will be disappointed. In the meantime, here’s hoping that Carrie-Anne Moss does indeed play the MCU’s first queer character—and that she’s paving the way for many more to come.