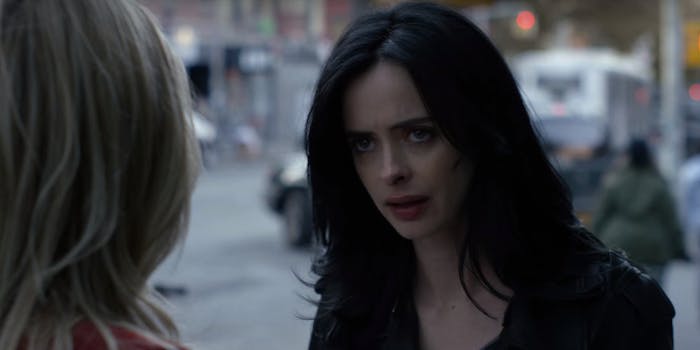 ‘You have no idea what I’ve done.’

Netflix has released the full trailer for Jessica Jones, and our former superhero has blood on her hands.

Jessica (Krysten Ritter) is still dealing with the aftermath of what Kilgrave (David Tennant) did to her—and made her do—as she tries to put her life back together. But Kilgrave’s reappearance in her life launches a big game of cat and mouse. He wants Jessica, and he’s willing to toy with and take advantage of anyone who gets in his way—and even some who don’t.

But Jessica has some powerful allies in her corner, notably Luke Cage (Mike Colter), who takes on the role of the concerned romantic interest—a role usually reserved for the main female character in a superhero movie—as he asks her the important questions about Kilgrave and her superpowers. The change of pace is downright refreshing.

All 13 episodes of Jessica Jones will be released on Nov. 20. Adele’s new album comes out the same day, which means one thing is certain.

So nice that Jessica Jones and Adele's new album are both arriving on Nov 20. I always wanted to experience the Saddest Day Ever