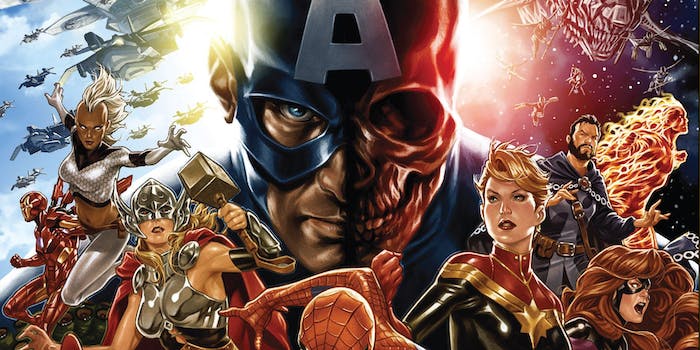 After months of backlash, Marvel has finally posted an official response to the Hydra Captain America controversy. This comes just in time for issue #1 of Secret Empire, the high-profile crossover event where Captain America reveals his true colors as a Hydra agent.

The storyline began in Captain America: Steve Rogers last year, stirring controversy due to Hydra’s history as Nazi villains. The comic was criticized for turning Captain America into a fascist villain, and the surrounding PR campaign hasn’t helped. Marvel is promoting Secret Empire as its biggest comic of the year, essentially ignoring the widespread criticism of its political themes. Several comic store owners have spoken out about the toxicity of the marketing campaign, which included free Hydra merchandise for retailers.

On the eve of Secret Empire #1, Marvel published a statement to ABC News.

“At Marvel, we want to assure all of our fans that we hear your concerns about aligning Captain America with Hydra and we politely ask you to allow the story to unfold before coming to any conclusion.

What you will see at the end of this journey is that his heart and soul — his core values, not his muscle or his shield — are what save the day against Hydra and will further prove that our heroes will always stand against oppression and show that good will always triumph over evil.”

In other words, Captain America will redeem himself. This isn’t exactly surprising news, given that Captain America is one of Marvel’s most iconic heroes. No one expected him to become a permanent villain. The problem is, for many fans the damage is already done.

While it’s encouraging (and extremely unusual) to see Marvel respond like this, the statement doesn’t actually engage with the political criticisms of Secret Empire. It focuses on the potential damage to Captain America’s brand, reassuring fans that he’ll eventually save the day. In reality, the controversy extends far beyond the public image of one character. It’s about fans who see Marvel prioritizing a fascist villain over comics with diverse heroes and creative teams. It’s about the rise of far-right politics in real life.

Marvel publishes dozens of comics, and usually if you don’t like one, you’ll just ignore it and read something else. But Secret Empire is impossible to ignore. It’s a ubiquitous presence in comic book media and fandom, and as long as Marvel promotes it, it’ll continue to lose fans who find it offensive.