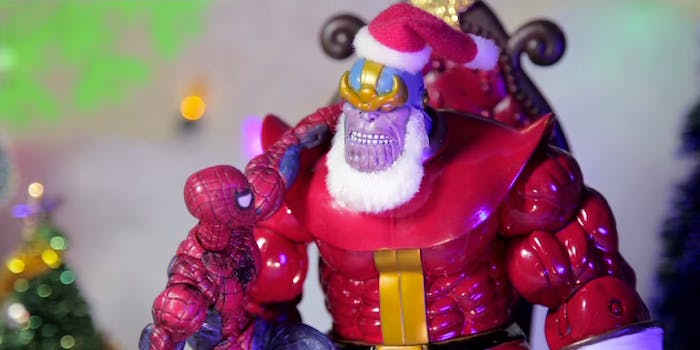 Marvel wishes fans a merry Christmas with this hilarious video

A Marvel villain disguises himself as Santa with hilarious results.

Thanos is taking some cues from another grinch this holiday by dressing up as Santa to ruin the Marvel heroes’ holiday cheer.

Marvel’s holiday spectacular, in which the villain impersonates Santa Claus to break into King Black Bolt’s castle, is wacky from the get-go. It looks like something straight out of Robot Chicken, but it nails the stop-motion animation to make the official Marvel treatment and the humor work even better.

In this case, Thanos is forced to sit in Santa’s chair as each superhero sits on his lap and air their Christmas lists to him. Sure, they may kick evil’s butt daily, but they’ve got their hearts set on that special something (or someone) this year.

Even the Hulk wants more than to just smash—although he does get to do that too.