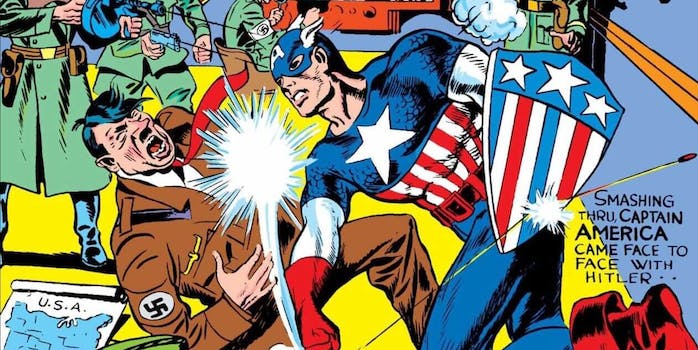 Marvel CEO Ike Perlmutter is a friend and political donor to Trump.

Marvel Comics just pulled another political essay, this time for being “critical of America,” according to the Hollywood Reporter. Just two weeks ago, Marvel rejected a similar essay from acclaimed cartoonist Art Spiegelman. Spiegelman is best known for his Pulitzer-winning book Maus, a graphic novel inspired by his father’s experiences as a Polish Jew during the Holocaust. His recent Marvel essay explored the anti-fascist history of classic superheroes, but Marvel decided it was too critical of President Donald Trump.

Written by Mark Waid (Captain America, Daredevil), this second and most recent essay was meant to be published today in Marvel Comics #1000, an extra-long issue celebrating Marvel’s 80th anniversary. It appeared beside an image of Captain America in early drafts of the comic.

The publisher replaced it with a less hard-hitting essay (also written by Waid), but the original version doesn’t actually sound that controversial. Waid did criticize the American political system, but he’s hardly a firebrand. This is the kind of thing we hear from mainstream Democratic candidates:

“The system isn’t just. We’ve treated some of our own abominably. Worse, we’ve perpetuated the myth that any American can become anything, can achieve anything, through sheer force of will. And that’s not always true. This isn’t the land of opportunity for everyone. The American ideals aren’t always shared fairly. Yet without them, we have nothing.”

Waid also called for people to protest in the streets, but with the caveat that America’s “flawed systems” can still be used for good. Which, once again, is not an unusual sentiment in the Trump era—or for a Captain America comic.

“America’s systems are flawed, but they’re our only mechanism with which to remedy inequality on a meaningful scale. Yes, it’s hard and bloody work. But history has shown us that we can, bit by bit, right that system when enough of us get angry. When enough of us take to the streets and force those in power to listen. When enough of us call for revolution and say, ‘Injustice will not stand.’”

When Marvel pulled Spiegelman’s essay, it was an offensive and attention-grabbing move because it rejected the political insight of a Jewish creator with personal expertise in fascist history. Replacing Waid’s essay just feels ridiculous.

As a longtime writer for both Marvel and DC, he’s the quintessential superhero comics insider. He’s a middle-aged white man with a bibliography so long it needs its own Wikipedia page, and although he was recently involved in a lawsuit against a Gamergate-esque hate group, he’s not exactly an edgy leftist. Republished in THR, the full essay reads like a perfectly appropriate choice to run alongside a picture of Captain America. Yes, it criticizes structural injustice in America, but it also praises the country’s ideals. The new essay apparently tones down the criticism, focusing more on Captain America’s symbolic power.

The rejection of these essays feels representative of Marvel’s deeply conflicted politics. Marvel CEO Ike Perlmutter is a friend and political donor to Trump. This fact hangs over the publisher’s head, coloring its attempts to be “apolitical.” Meanwhile, books like Captain America have always commented on contemporary politics, and superhero comics are all about fighting injustice. A truly apolitical stance is impossible, especially in 2019.

At the same time, Marvel is promoting a more diverse range of characters across its comics and movies, while tacitly trying to appease a vocal community of conservative fans who hate anything they deem too progressive—which basically means anything starring a woman or a person of color. Hence the repeated attempts to make it look like Marvel isn’t “taking sides.” The publisher can’t offer a coherent response to these disparate issues, resulting in a situation where it manages to offend practically every demographic in its own audience.

Marvel’s new editor-in-chief embodies the problem at hand. C.B. Cebulski said last year that he wanted to avoid going “too deep” on politics in the Marvel Universe, but his promotion had its own political subtext. It’s now public knowledge that Cebulski spent two years pretending to be Japanese so he could publish Asian-inspired comics and circumvent Marvel’s internal rules for editors. He adopted the pseudonym “Akira Yoshida” during a time when real Asian writers struggled to find a foothold at Marvel and DC. But in 2018, Marvel decided that this piece of Cebulski’s history was no big deal. His secret Japanese identity was not deemed “political” in the same way as Spiegelman and Waid’s essays.

Of course, the choice to pull these essays totally backfired, creating a textbook example of the Streisand Effect. Waid’s article probably wouldn’t have attracted much attention had it remained in Marvel Comics #1000, but now it’s being widely reported as an illustration of Marvel’s troubled politics.