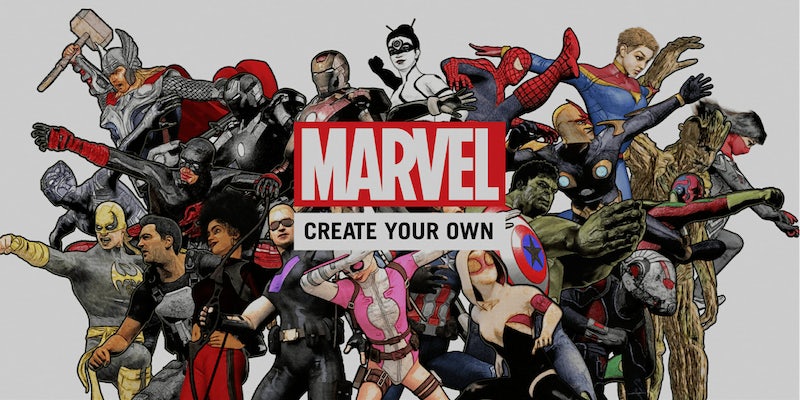 The bad news: There's a long list of restrictions.

Marvel announced that it would soon launch a platform to allow fans to create and write their own Marvel comics. However, good luck writing something that can get past Marvel’s very restrictive guidelines.

The app is called Marvel: Create Your Own, and Marvel described the service—which is powered by Tap Tap Comics—as a “fan-powered community where users can write, create, and share their own Marvel stories.” In a video accompanying Marvel’s announcement, Marvel framed the app as a useful tool for someone who wants to write comics but might not be great at drawing. The app allows you to move a variety of Marvel characters, change backgrounds, and put together comic layouts.

Marvel: Create Your Own hasn’t launched yet, so anyone interested in the app has been encouraged to sign up for updates. However, some fans have already spotted a number of issues that will inevitably pop up thanks to the fine print attached to the app’s launching page.

For one, Marvel: Create Your Own is essentially licensed fanfiction, which comes with its own can of worms. In its terms and conditions, Marvel says that it will own anything created within the app. By signing up for Marvel: Create Your Own, users agree that Tap Tap, the platform Marvel is using, is allowed to “edit, modify, alter, remove, block, terminate, discontinue, cease or refuse access to, and/or monitor any user account and/or any User-Submitted Content for any reason.”

Many creators have online platforms that they could potentially share their Marvel creations on, but the terms and conditions ban users from reproducing, reprinting, sharing, or making money off of any of the content you make on the app. So while users may create panels or comics that people might want to read, they can’t share it online and users likely can’t access it without signing up for the app. (As of right now, you can only use the app if you’re located in the U.S., Canada, Australia, or Singapore, which severely limits just who can even view those comics.)

And that’s all before diving into what users can and can’t create on Marvel: Make Your Own. Restrictions of what people can’t write about aren’t unusual for this kind of thing, but Marvel and Tap Tap’s list of off-limits topics are extensive.

Restrictions vary from the corporate—you can’t feature ads and properties that aren’t owned by Marvel or Disney—to the political and the potentially obscene (e.g., you can’t curse, even with the use of symbols; or show nudity, pornography, or graphic violence). Many of the restrictions also border on the absurd and completely vague. For example, users aren’t allowed to create content that includes killer bees, gossip, or aliens; forms of discrimination; controversial topics such as “social issues”; guns; “alternative lifestyle advocacies”; or double entendres.

kate bishop is done with this bullshit pic.twitter.com/3RPqsBG3HH

Heyyy so I heard Marvel is letting us make our own comics now and there are some rules about stuff we have to include? Anyway @bisonfisticuffs and I made you a thing, I think we got everything in there pic.twitter.com/nF3qyJwIQl

Marvel (and the comics industry as a whole) were once restricted by what they could include with the Comic Code Authority, where publishers submitted their comics to a committee and self-censored their works. (The CCA was effectively ended by 2011 after the last publishers—DC Comics and Archie Comics—stopped using it as a marker.) But as some pointed out, the list of restrictions on Marvel: Make Your Own was so extensive that the contents of the majority of Marvel’s own comics would be banned from the app.

The ones that are left are the ones I can't immediately recall seeing in a marvel comic pic.twitter.com/USgPhLCEpn

The X-Men have long faced discrimination for being mutants. Frank Castle (aka the Punisher) is a gun-toting vigilante. Jessica Jones has an impeccably impressive potty mouth. Deadpool constantly breaks the fourth wall and violates many of these rules to the point where the only way a film adaptation worked was if it was R-rated. The cover of Invincible Iron Man #1 sexualized its underaged protagonist and featured her with a bare midriff, which is also banned on Marvel: Create Your Own under “suggestive or revealing images.” A number of Marvel series take place in space where the heroes often encounter aliens—4.5 out of 5 of the Guardians of the Galaxy are aliens. (Peter Quill is only half human.) Even Captain Marvel even got her powers from an alien. Any of the queer romances in Marvel comics would probably also be off-limits.

And therein lies another issue with Marvel and Tap Tap’s terms and conditions. They’re vague enough that enforcing those policies may be left to the companies’ discretion—and even with the number of things banned from the app, there’s fear that the material posted could get out of control very quickly. Then, there is the question of what’s the point: Some creators can already do the things that Marvel’s app would allow them to do without any of the restrictions or hassle.

Only time will tell its success. According to Marvel, the app will launch “soon.”