Marvel’s heroes are at odds again in ‘Civil War II’

Ten years after the crossover event that inspired Captain America: Civil War, Marvel is launching Civil War II, another cataclysmic feud between two factions of superheroes. Prompted by the appearance of a precognitive Inhuman named Ulysses, the Marvel heroes take sides over a Minority Report-style question about whether they should change the course of future events.

Captain Marvel immediately decides that the Avengers should use his predictions to stave off future catastrophes. On the opposing side, Tony Stark argues that if events can be changed, then Ulysses’s visions only show one possible future, and the Avengers should avoid messing with things they don’t understand. Written by Marvel stalwart Brian Michael Bendis and drawn by David Marquez, Civil War II #1 kicks off a crossover event that will continue for the next few months of Marvel comics.

From the get-go, this feels like an archetypal Avengers comic. It’s a very accessible introduction for new readers, the downside being that it doesn’t have a strong sense of individuality.

More than a third of the comic follows a by-the-books showdown between the Avengers and a big shiny monster, which doesn’t seem wholly necessary. Compared to the main book from last year’s Secret Wars crossover event, an impressive work of epic fantasy, Civil War II feels like any old Avengers comic—so far. This is only the first issue, after all.

Comparisons to the original Civil War are inevitable, and while Ulysses’s precognitive powers raise some interesting philosophical questions, the story feels less grounded than the Superhero Registration Act.

Bendis sets up a compelling conflict between Iron Man and Captain Marvel, but what about everyone else? Obviously this will explored in later issues, but Marvel’s “Protect the Future/Change the Future” divide has less of a personal impact than superhero registration, which originated in a period of post-9/11 paranoia, and forced characters like Spider-Man to reveal their secret identities to the world. This time round, the conflict isn’t quite so rooted in the world-building of the Marvel universe. It was injected artificially, by introducing Ulysses—a character who might as well have “generic everyman” stamped on his forehead. 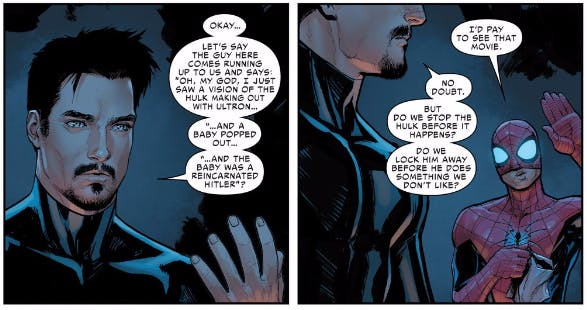 The best way to enjoy this kind of crossover event is to follow several angles as the story unfolds. Unfortunately, that isn’t really a practical option unless you have money to burn—especially in this case, because Civil War II #1 costs $5.99. For a 35-page comic that feels more like a prologue than the first chapter of a seven-part story, that seems a little high.

Civil War II is based around an interesting conceit, so we’re curious to see where Marvel goes with its roster of spinoffs and tie-in comics. For instance, we’re already intrigued by the idea of a Kingpin miniseries, and we’re interested to see how the recent Captain America plot twist fits into all of this. But after reading issue #1 of the title series, we’re inclined to wait until the dust has settled and pick up the trade paperback instead.