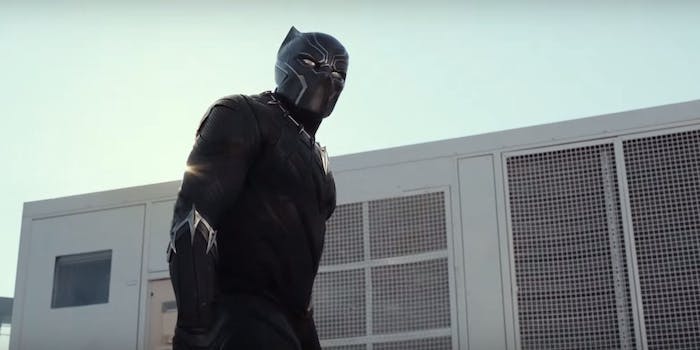 'You never quite know where he stands.'

Black Panther fans got a double helping of exciting news this week, as Marvel revealed fresh details about the character’s upcoming comic and his role in Captain America: Civil War.

“You never quite know where he stands,” said actor Chadwick Boseman, who plays Black Panther in Civil War and a solo film slated for 2018. “There’s always a bit of concealing and mystery. Not to say there’s not charm and he can’t be a ladies’ man and all that. It’s more like if there is humor, it’s more like James Bond.”

As in the comics, Black Panther—the monarch and spiritual leader of the fictional African nation of Wakanda—is a neutral figure in the conflict between Iron Man and Captain America. Executive producer Nate Moore described him as an “undecided voter,” adding that the young T’Challa of Civil War is more “fiery” and “fallible” than the Black Panther we know from the comics. The implication is that he’s still a relatively inexperienced leader at this point, leaving room for him to mature in his own solo movie.

The EW profile went on to discuss Black Panther’s costume, a durable chainmail suit made from vibranium, the ultra-rare metal that fuels Wakanda’s economy. While Chadwick Boseman found the costume uncomfortable, he touted its fictional properties: “It has the ability to absorb the attack of another person and repel or respond to that attack. That’s part of the power.”

T’Challa’s vibranum suit also plays a major part in a new article from Ta-Nehisi Coates, who is writing the much-anticipated new Black Panther comic. In The Atlantic, Coates wrote about his creative process with artist Brian Stelfreeze, the first new information we’ve heard about the comic since it was announced in September.

Looks great! Love it that @Stelfreeze and @tanehisicoates are pushing the limits of VIBRANIUM! CAN'T WAIT! -Beyonder pic.twitter.com/ljud3UILfx

For the new comic, Coates and Stelfreeze delved into the logistics of how Black Panther’s costume could work, specifically “absorbing kinetic energy and allowing him to fire that energy back out in short energy bursts.”

While discussing the comic’s concept art, Stelfreeze and Coates came up with the idea that Black Panther would be able to use that kinetic energy to “force push” his opponents like the Jedi and Sith in Star Wars, creating a dynamic new fighting move. When asked on Twitter about the main difference between working on a comic script and writing traditional prose, Coates highlighted the need for regular fight scenes.

The need for people to hit each other. Often by pg. 3 or so… https://t.co/R0ZiRekyK6

The first issue of the new Black Panther comes out next February, but in the meantime Coates has given fans a reason to dig through the character’s back-catalog. Writing about how he prepared for the comic, Coates mentioned that he was interested in T’Challa’s mother Ramonda, but wasn’t particularly into M’Baku, a Wakandan supervillain known as Man-Ape.

OK, it’s not a huge surprise to hear that Man-Ape won’t play a major role in the new Black Panther series. But Coates’ mention of Ramonda is an interesting hint—one that’s worth some casual researching over the next couple of months, just in case.