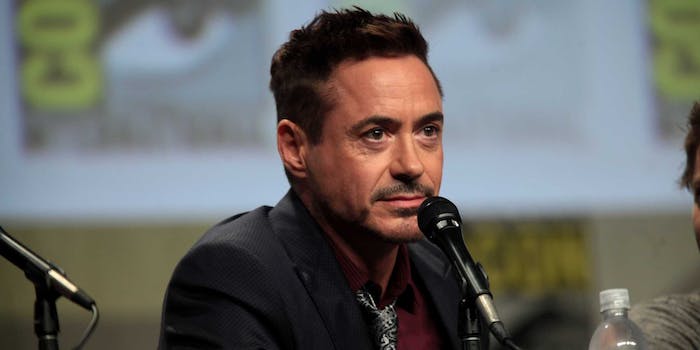 Someone please tell Robert Downey, Jr., that appearing on a talk show is not a 'big announcement.'

Robert Downey Jr. tweeted on Monday night that he’d be making a “big Avengers announcement” on Good Morning America the next day.

As a Marvel fan and professional nerd, I had a few theories about what he might be announcing.

Yes, the groundbreaking revelation was that, in the leadup to Avengers: Age of Ultron, the cast of the movie will be appearing on a selection of talk shows.

This is not news. It doesn’t even warrant an announcement. It’s literally the exact thing every major studio does when promoting a movie.

Marvel Studios excels at PR, expertly cultivating its fandom to the point where, in the summer of 2012, Tumblr basically turned into a repository for Avengers GIFs. Marvel stars are guaranteed to become the A-list of Comic Con, and they are micromanaged to the extent of being dressed up like a boyband for public appearances. But with this GMA announcement, Marvel’s promotional machine officially went off the rails.

Avengers: Age of Ultron comes out in three weeks. Its first trailer has been viewed over 70 million times on YouTube alone, and its target audience has already been bombarded with publicity materials for months. Unless a meteor hits North America in the last week of April, this movie is guaranteed to make a zillion dollars on opening weekend.

With that in mind, I have a heartfelt message to Marvel’s helicarrier full of elite PR agents: For the love of all that is good in the world, please just chill out. We understand that constant publicity is an integral part of the Hollywood process, but there’s a difference between blanket coverage and smothering your audience to death. If you carry on like this, we’ll be sick of the movie before it even comes out.