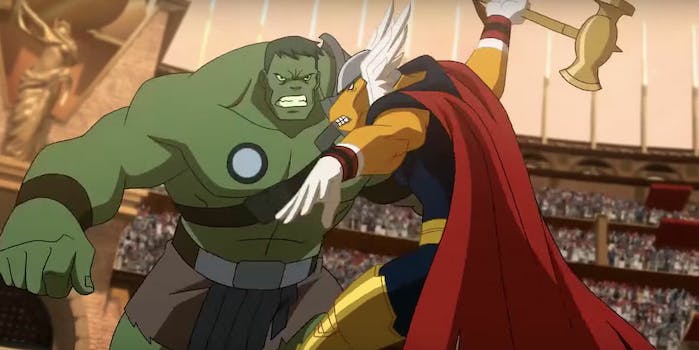 The best order to watch all 14 Marvel animated movies

In the world of superhero movies, there’s no name bigger than Marvel. Marvel Studios‘ live-action films have made a combined $13.5 billion worldwide since the release of Iron Man in 2008, and that’s not even including movies made by other studios like Spider-Man or Fantastic Four. With so much noise being made on the big screen, you’d be forgiven for thinking that’s all Marvel has to offer when it comes to movies, but you’d be depriving yourself of even more superhero fun.

Marvel got into the animated movie game long before it started releasing live-action films. Two years before the world met Robert Downey Jr.’s Tony Stark, Marvel debuted its first feature-length cartoon, releasing a total of 15 separate animated features since. Spanning classic comics storylines and a wide range of animation styles, each of these films showcases a different side of the Marvel universe. Don’t know where to get started? Here’s a ranking of Marvel’s animated movies.

WATCH: The Best Order to Watch the Marvel Cinematic Universe

Marvel animated movies: The best order to watch them in

If you’re surprised to discover Big Hero 6 is a Marvel movie you’re not alone. Initially led by the X-Man Sunfire in the comics, this screen adaptation is broadly different than the original book. The changes don’t keep Big Hero 6 from being one of the best superhero films ever made, even if it’s missing Captain America. Hell, it’s the only superhero movie to win an Oscar for Best Picture, albeit for Best Animated Feature. Only Fred and Baymax make it over from the comic books, but you won’t miss the rest of the cast. Big Hero 6 introduces us to Hiro, a 14-year-old robotics genius who longs for adventure but is held back by his age. His brother helps him join a world-class research lab, but when tragedy strikes, Hiro must use all his skills to create a team of his own to stop an unimaginable evil. Packed to the brim with exhilarating action, Big Hero 6 is made great by a story that puts believable relationships at the center of its story. You might even find yourself shedding a tear. Other superhero movies might be darker, but Big Hero 6 has more heart than all of them combined.

Was your favorite part of Thor: Ragnarok seeing the Hulk as a god of gladiatorial combat? That story actually didn’t involve Thor at all in the original, and there’s a full-length feature version for you to watch. In the MCU, Hulk banishes himself, but the comic version of this tale is much more tragic, with Hulk being exiled into deep space by his closest friends. Crash-landing on the alien world Sakaar, our hero is captured and forced to fight for his life in a seemingly endless stream of battles. Most Hulk stories focus on his alienation, but Planet Hulk shows us a world where Hulk fits in. He’s a monster on Earth, but on Sakaar he’s a king.

In the year 2000, Marvel launched the Ultimate line. After decades of publishing, Marvel found new readers felt intimidated by the complicated (and sizable) backlog of their main line, so they debuted a new universe. Featuring the same beloved characters as the main Marvel comics books, the Ultimate stories were a darker, more modern reimagining of the heroes. Ultimate Avengers is based on that universe, so expect a meaner Captain America than you see in the movies along with a far more brutal Hulk. Ultimate Avengers is a paramilitary take on the heroes, so while they might be fighting aliens, expect them to do it with extreme prejudice. Sadly Marvel cut the best line from the comics for the movie, but the spirit is still there.

This continuation of the story from Ultimate Avengers sees Black Panther finally join the party as Earth’s mightiest heroes deal with the end of the Chitauri invasion. This time the aliens have landed in Wakanda, leaving T’Challa no choice but to seek out the Avengers for help. While Ultimate Avengers focuses on introducing the characters, the sequel showcases them, giving each a moment to shine during the unrelenting action. After seeing Black Panther in action, it’s hard to understand why it took so long for the studio to bring him to the silver screen. Thankfully, that wrong will soon be righted. Just make sure you correct anyone who says his first movie appearance was in Civil War. This movie counts too.

While the MCU introduced Doctor Strange in 2016, he made his animated debut 10 years ago. Both films are origin stories where Doctor Strange finds magic following a brutal car wreck, but this take features a decidedly darker turn than its live-action cousin. You’ll find the demonically possessed children side by side with magical sword fights, with none of the humor of the theatrical title. In its place is a mystical epic overflowing with Lovecraftian monsters and dark world-ending threats. Marvel might never get around to making a pure horror film, but this take on Dr. Strange comes close.

Marvel might be known mostly for superheroes, but its universe is also full of magic, monsters, and darkness. MCU fans might have gotten a taste with Dr. Strange, but Hulk: Where Monsters Dwell is a full-on Halloween love letter to Marvel’s supernatural side. Hulk teams up with Dr. Strange to fight a group of monsters who turn out to be teenagers who transformed in their sleep. When they discover the evil Nightmare is behind the transformations, they call up the Howling Commandos—a supernatural team made up of the zombie Jasper Sitwell, Man-Thing, Vampire by Night, Warwolf, and Minotaur—for help. Valuing furious action and supernatural theatrics over depth, Where Monsters Dwell is the kind of movie where Hulk uses power armor in dreams while a werewolf fights monsters. Even Thor: Ragnarok can’t make that claim.

Fans upset that Iron Man 3’s Mandarin was an imposter and not the evil villain they know and love will always have The Invincible Iron Man. While this movie is yet another origin story, the inclusion of Iron Man’s larger-than-life villains (instead of just another super soldier or robot) gives this animated tale comic-series-level scope. The MCU might finally be getting too cosmic villains, but the Mandarin was showing off big-stakes magic in cartoons a decade ago. Don’t worry if you’ve already seen Tony Stark’s origin story in Iron Man; this one has a different take than the theatrical movie.

Love comic book movies but hate how they get your favorite characters wrong? Next Avengers: Heroes of Tomorrow sidesteps the problem entirely by focusing on the children of the Avengers, who are under the tutelage of a now older Hulk and Iron Man. After Ultron murders most of the Avengers, their kids are taken into hiding. Twelve years later, they emerge ready for revenge in a world overtaken by evil robots. It’s storytelling that doesn’t get bogged down in canon while still treating fans to a few winking inside references. If the animation initially feels a little childish, don’t worry, the story makes up for it.

Tales of Asgard is the second Marvel animated movie to feature younger versions of the heroes we know and love. This time around, viewers are treated to a tale of the teenage Thor, hungry to prove himself as a worthy warrior of Asgard. Teaming up with Loki and The Warriors Three on a quest to find the Sword of Surtur in Yodenheim, our arrogant hero finds himself in situations that try his morals along with his strength. Set before the first Thor film, Tales of Asgard will delight viewers who wish the films had more mythology and fewer space battles.

The plots of most Iron Man stories over the years already read like anime series. Our beloved billionaire scientist has transferred his brain into a computer, gone to war with a race of mutants, and even been temporarily replaced by a teenaged version of himself from the past after an alternate-dimension version of his best friend’s dad took over his mind. Rise of Technovore actually sees him make the jump to anime, and the resulting high-tech carnage is a sight to behold. Featuring an all-star cast of heroes ranging from War Machine and Black Widow to Hawkeye and the Punisher, Rise of Technovore has Iron Man getting framed by a terrorist, forcing him to fight through his friends to clear his name and save the world. The animation is cutting edge, and while the story can be familiar, the action is enough to make anyone start making laser sounds under their breath.

Superheroes fighting each other is just good, clean fun. Heck, the first Avengers comic involves the team initially fighting Hulk before realizing Loki is their true enemy. In the anthology Hulk Versus, we see the not-so-jolly green giant lay waste to two of Marvel’s biggest heroes in two separate tales. In Wolverine, the titular X-Man tracks Hulk across Canada, unaware someone is hunting both of them. Thor sees Hulk brought to Asgard by Loki to play a trick on his brother and maybe destroy some property while he’s at it. Since this is a collection of stories instead of a full-blown film, don’t expect a stunning story. If action is what you seek, Hulk Versus is a reliable gem.

Marvel’s Heroes United movies are lighthearted fare, designed to show off the joys of a superhero team-up while telling a big action story full of laughs. Centering on the dueling hubris of the Avengers two leaders, Iron Man & Captain America: Heroes United follows our heroes as they takedown Red Skull and an army of Hydra super soldiers. The computerized animation takes some getting used to, but Clancy Brown is a joy as the villainous Taskmaster. If you’re looking for a good film for your kids, Iron Man & Captain America: Heroes United fits the bill.

Each Avenger could easily star in his or her own anime, but Black Widow, in particular, seems designed for the medium. Striking a significantly grittier tone than the other Marvel animated titles, Avengers Confidential sees the assassin meet the vigilante the Punisher to stop an evil plot from the group Leviathan. Longtime fans of the genre will be interested to know that legendary anime director Kenichi Shimizu of Parasyte and Roujin Z fame directed the film. If you like your spy movies over the top and violent, this is dark as it gets in the Marvel world.

Marvel excels at telling patently ridiculous stories in a way that draws you in, and this animated tale of mad scientists run amok is a shining example. Reimagining the origin story of the Hulk villain Zzzax, a being of pure energy and onomatopoeia, this adventure focuses on the humorous partnership that arises when Iron Man and the god of smashing team up. Computer effects make the animation occasionally look a little odd, but it’s highly stylized art—and what comic fan could turn their nose up at that?