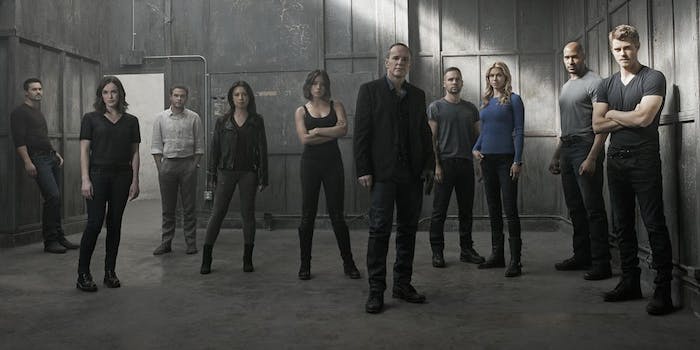 ‘Agents of S.H.I.E.L.D.’ season 3 kicks off with Inhuman drama

The first scene of the 'Agents of S.H.I.E.L.D.' premiere is making us very excited for more Inhuman action.

Agents of S.H.I.E.L.D. returns next week, and we won’t blame you if you’ve forgotten some of the huge plot twists from last season. Luckily, you can jog your memory by watching the first five minutes of the new season premiere right now.

The episode launches straight into one of the biggest developments the Marvel Cinematic Universe has seen so far: the introduction of the Inhumans.

This clip introduces a new Inhuman who is understandably panicked by his sudden ability to melt solid metal—and who quickly finds himself being hunted by a new group of antagonists led by actress Constance Zimmer. Well, it wouldn’t be Agents of S.H.I.E.L.D. without a ton of rival factions battling for our attention, would it?

The other big moment here is Skye introducing herself as Daisy, adopting her comic-book identity as the superhero/S.H.I.E.L.D. agent Daisy Johnson, aka Quake. She’s also got a new Black Widow-style costume to match, as the previously S.H.I.E.L.D.-centric show draws closer to its superhero origins.

The influx of new superpowered characters means that season 3 is a good time for Marvel movie fans to catch up with the show, because it’s sure to tie in with Captain America: Civil War next year. And, of course, there’s the Inhumans movie—although that won’t be happening for a few more years.