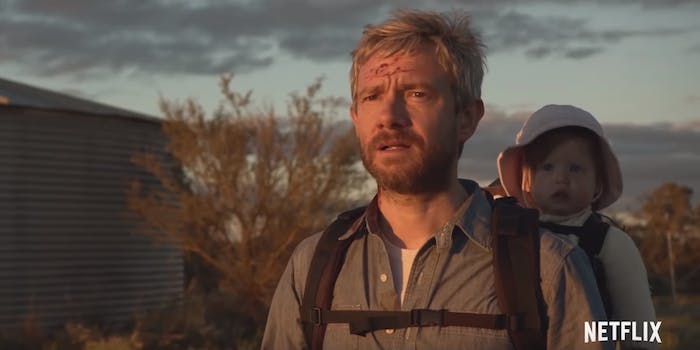 Australian zombie movie Cargo is about to premiere at the Tribeca Film Festival, and the first trailer looks very intriguing. Set in post-apocalyptic Australia, Martin Freeman plays a dad on the run with his baby daughter.

Cargo is based on a short film by Ben Howling and Yolanda Ramke, starring lesser-known Australian actors. After the YouTube short went viral in 2013, Ramke and Howling got to expand their idea into a feature-length movie. It’s a ticking-clock thriller where Freeman’s character knows he’s been infected by the zombie pandemic and has 48 hours to get his baby to safety before he transforms.

Could Cargo be the indie zombie hit of 2018, following in the footsteps of movies like Ravenous and The Girl With All The Gifts? We’ll find out soon because the review embargo lifts on April 19. Sadly it’s not getting a theatrical release in the U.S., but you’ll be able to see Cargo on Netflix on May 18.