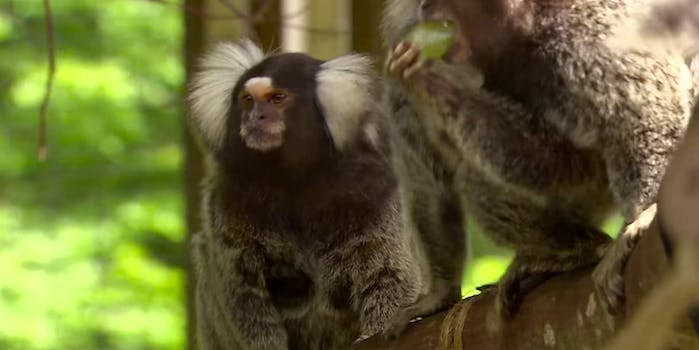 What we can learn from watching marmosets watch TV

Wild marmosets in the Brazilian forest can learn quite successfully from video demonstrations featuring other marmosets, Austrian scientists have reported, showing not only that marmosets are even better learners than previously known, but that video can be used successfully in experiments in the wild.<

Tina Gunhold, a cognitive biologist at the University of Vienna, had worked with a population of marmoset monkeys in a bit of Brazilian forest before this particular experiment.

The forest is not wilderness. It lies near some apartment complexes, and the marmosets are somewhat used to human beings. But the monkeys are wild, and each extended family group has its own foraging territory.

Dr. Gunhold and her colleagues reported in the journal Biology Letters this month that they had tested 12 family groups, setting up a series of video monitors, each with a kind of complicated box that they called an “artificial fruit.

All the boxes contained food. Six of the monitors showed just an unchanging image of a marmoset near a similar box. Three of them showed a marmoset opening the box by pulling a drawer, and three others a marmoset lifting a lid to get at the food.