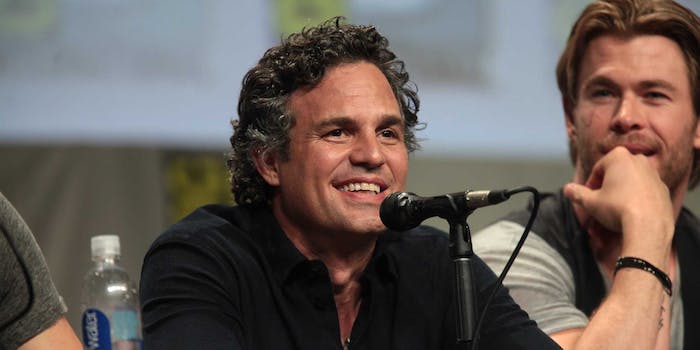 Can the Hulk finally persuade Marvel to start catering to Black Widow fans?

As a Hollywood A-lister who spends his free time campaigning against climate change and social injustice, Mark Ruffalo is used to fighting the system from within. But his latest project has a more modest goal than saving the world: persuading Marvel to sell more Black Widow merchandise.

Marvel and Disney have long been criticized for excluding female characters from their toys and other retail products. Disney reportedly wanted the Marvel brand to focus on boys because girls were already covered by the Disney Princess angle, which is why there is a lot of merchandise for male superheroes but very little for characters like The Avengers‘ Black Widow and Guardians of the Galaxy‘s Gamora.

This decision hints at the bizarre assumptions that boys will be put off by the mere presence of a female character and that Black Widow fans are few and far between.

On Twitter Tuesday night, Ruffalo wasn’t having any of that.

.@Marvel we need more #BlackWidow merchandise for my daughters and nieces. Pretty please.

Could his tweet be the final straw that shames Disney into selling more Black Widow toys? If so, the change will be long overdue. Disney/Marvel’s gendered merchandising strategy has become so blatant that fans are tracking it on social media, highlighting numerous examples of toy collections that only include male characters or t-shirts that characterize boys as heroes and girls as damsels in distress.

Marvel Studios has a reputation for treating its female characters better than most superhero franchises, although this image is beginning to fray at the edges. Last week Chris Evans and Jeremy Renner jokingly called Black Widow a “slut” during the press tour for Avengers: Age of Ultron, while Scarlett Johansson‘s demeaning interview questions are so recognizable that Cosmo was able to parody them in a genderflipped interview with Johansson and Ruffalo.

“Do you have any special poses for the red carpet?” the interviewer asked Ruffalo, before giving Johansson a more serious question about stunt work.

The male Avengers actors are well aware of the hassle Johansson (and by extension Black Widow) receives while promoting Marvel movies, which is why so many fans were disappointed by Evans and Renner’s behavior last week.

At least Ruffalo is taking some kind of action, as he promised in a much-reblogged Tumblr post where he signed off on the message, “Petition for all the Marvel actors to agree that whenever Scarlett gets a blatantly sexist question one of the Chrises just takes it instead.”

With at least a couple of weeks left in the Age of Ultron promotional treadmill, Ruffalo’s male costars need to step up their game.