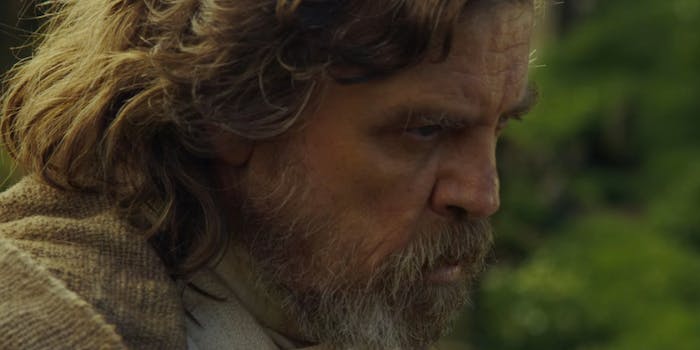 He's at it again.

Star Wars: Episode VIII won’t come out until December 2017, but fans are already watching everything director Rian Johnson and the cast say for spoilers, hints, and theories, which will often make headlines. And Mark Hamill damn well knows it.

Hamill has been interacting with fans on Twitter for years, offering jokes, insights, and thought-provoking answers to their questions about Luke Skywalker, the Joker, and other roles throughout his career—and he’s one of the more accessible Star Wars actors on social media. But more often than not Hamill likes to gently troll his followers, something that’s all in good fun. Take, for example, his response to one fan about his brief appearance in The Force Awakens.

Hamill is also well aware of the many fan theories swirling around Luke in the looming question of Rey’s parentage, who were last seen staring each other down on Ahch-To. And with Episode VIII filming underway, it’s likely that he knows some answers to what happens in the movie (though maybe not the ones you’re looking for) despite Daisy Ridley’s insistence that Episode VIII is “two hours of me and Mark Hamill staring at each other.”

Put those things together, and Hamill is using his Internet powers to troll Star Wars fans on just how his character is related to Star Wars’s new trio.

Earlier this month, Hamill discussed his relationship with Ridley when asked if he was a father figure to her at the Oxford Union, leading some people to believe that he was alluding to the theory that Luke is Rey’s father.

“Daisy is incredible, so genuine, appealing, loveable, she beams, she has a wonderful charisma, I adore her,” he told the audience. “She’s my daughter’s age—and that’s how I relate to her.”

After noting the audience’s reaction, Hamill added that he was just teasing them: “I don’t mean anything by that. As actors that’s how I relate to that.”

Shortly after Hamill’s talk, he wished his co-star Oscar Isaac (who doesn’t have a Twitter account) a happy birthday and poked fun at the possibility of spreading spoilers by noting that Isaac and Hamill’s son are the same age. Fans wouldn’t have to worry anyway because we already know who Poe Dameron’s parents are in Star Wars canon.

Happy Birthday Oscar! I'd say you're my son's age, but fear being accused of accidentally leaking "spoilers" #EPVIII https://t.co/LY7FdgyUX6

He intentionally went for it again after praising Ridley’s response to body shamers who criticized her appearance, using the response of “fellow cast member” instead of “daughter.”

And Hamill couldn’t resist trolling fans once again when he wished John Boyega a happy birthday as well.

Happiest of Birthdays to the Finn-tastic @JohnBoyega a swell fella who's just sonsational in #EP8 Hmmm-Typo or spoiler? YOU decide! #Troll

And he got the bonus of Boyega’s approval.

Much trolling in the future, there will be.