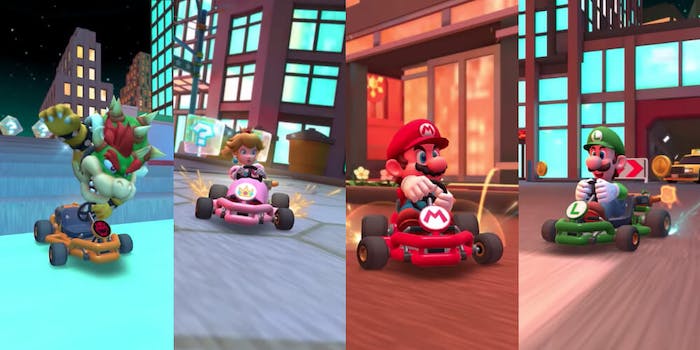 New controls take some getting used to, but Mario Kart Tour has a lot to offer to old and new players alike.

Mario Kart Tour has finally arrived, and racing fans the world over are already gunning for first place. Whether you’re new to the franchise or a diehard racer from the 3DS, N64, or Wii days, Mario Kart Tour is a fairly accessible mobile version of the much-beloved console game.

The iOS version of Mario Kart Tour officially launched on Wednesday, Sept. 25. (There is no known release date for an Android version at the time of publication.) New content will refresh on the app at least every two weeks, as the campaigns expire and reveal new levels and cups.

If you’re booting up the game for the first time, prepare for a little bit of a delay. It’s a decent-sized game with a lot of data to process, so it takes a few minutes to get everything downloaded. In less than two hours of playtime, it had also sucked down 20% of my battery—more than the usual Facebook drain (14%) or Instagram (15%).

Mario Kart Tour is free to download in the iOS App Store. Simply search for the title, tap Get, and log in with your Nintendo account to start playing. It offers in-app purchases to unlock levels and custom features more quickly, but it’s easy to play without spending a dime.

A Gold Pass buy-up is available for $4.99 a month, which, as Polygon points out, is pretty steep when you consider you could access all of Apple Arcade for the same price.

If you’re a new player, here’s what you need to know to catch up for Mario Kart Tour: Classic Nintendo characters all cram their cartoon booties into little customizable go-karts. Players then race their way through increasingly complicated cups, jostling for first place while unleashing a barrage of special items to either help themselves or hurt other players’ chances at victory.

For longtime fans of the Mario Kart franchise, Mario Kart Tour will be easy enough to catch on to. The players are who you’d expect, the items largely familiar (more on that later), the music and race tracks feature old favorites, and track owner Lakitu’s still floating around to offer relevant tips and tricks. Controls are fairly intuitive conversions of the Mario Kart Switch or 3DS ones you know and love, and cups are still arranged in familiar sets of tracks. Also, racing at 50cc still feels excruciatingly slow, and you’ll have to slowly work to unlock all the kart configurations and characters you want. And yes, the dang blue shells are still a menace. It’s a Mario Kart game, through and through.

That said, there are some new features in Mario Kart Tour—some of which greatly enhance your experience, and many of which do not. Is it still fun? Absolutely. But in releasing a free-to-play version of a game that Nintendo necessarily wants to be a money-maker, the app feels at times cluttered with unnecessary layers and frills, complicating an otherwise pleasant mobile gaming experience.

It’s impossible to talk about a new-to-mobile game without delving into its controls. It’s a racing game, so you know you have a steer, use items, and hopefully drift, each of which had its own button on a Switch or N64 controller. When all you have to work with is the touchscreen on an iPhone, things get a little more complicated.

Steering: Slide your thumb or finger along the screen from left to right to position your kart’s trajectory. I found it easiest to use my index finger, as I had more available range of motion than with my thumb; if you play on a larger-screened iPhone than my 8, you might agree. Helpfully, Mario Kart Tour’s UI automatically displays an arrow in the direction of your movement, which is a really helpful feature for a chronic oversteer victim like me. (Sound familiar? You can also toggle “Smart Steering” in the settings menu to keep yourself even more on track. Literally.) You can also use your phone’s gyroscope to steer, but I can feel myself getting carsick and frustrated just typing that.

Items: Simply tap to use the item in your hopper. You can tap the same finger you’re using to steer, risking a misdirection in your trajectory, or you can tap a second finger anywhere on the screen to release, which just makes it a little harder to see what’s going on. The settings menu also includes an auto-deploy option to use whatever item you were holding when you pick up a new one, if you want to leave precise shell timing to the gods.

Drifting: Despite being a respectable racer on every edition of this game since the mid-’90s, I struggle with manual drift on the best days. Mario Kart Tour is 100% playable in “automatic transmission” mode without manual drifts, but if you want to be able to access the Ultra boost, you’ll have to master this skill: Steer in the direction of your turn and hold down as the sparks turn from blue to orange to pink. Release your finger at just the right time to get a little extra bump in speed.

One of the first things you’ll discover about Mario Kart Tour is that it tracks an obscene number of different stats and collectables. Sure, you’re used to collecting coins and unlocking new characters, karts, tires, and parachutes along the way. But get ready to add a mess of other gizmos and gadgets to the mix: There are login bonuses for each day you play, stars to help you unlock future cups (each race is on a five-star scale instead of three), rubies for in-app purchases, tickets to skip ahead, and, perhaps most critically, XP for each racer, each kart, and each ’chute. At the end of each race, the game will tally up all the points you’ve earned for the rider and racecar in question, adding them up and doing some multiplier math to determine what new features you’ve unlocked. It’s a bit overwhelming.

In practice, I found this meant different characters’ racing styles were functionally indistinguishable, but you’re incentivized to level them up equally to take advantage of various upgrades and special abilities. For example, one parachute I unlocked in the first two cups makes your character more likely to draw a bomb item from a present drop. The three racers I unlocked the first afternoon offered slightly different default modes, from Toadette’s mushroom stash to Peach’s heart of protection. But long gone are the days of clicking the + button to see more about each car’s weight, handling, traction, and so on. They traded useful (but perhaps meaningless!) stats for seemingly more vanity-driven ones that actually do affect gameplay.

If—or, let’s be honest, when—you start to panic about what does what and where and when, there’s a helpful Tips & Tricks panel available from many spots in the home screen that will offer a breakdown of all the items, racing techniques, and points. It’s how I figured out there’s a wonky two-finger operation to allow you to drift and fire off an item simultaneously, since I apparently tapped through that tutorial too quickly at the outset.

Elsewhere in the home screen, you’ll see a meter for your progress toward the next player level, the number of coins you’ve collected, and the number of rubies available to spend. The available levels are displayed on a big carousel in the middle of the screen, and the menu at the bottom opens up easy access to the store, special offers, and pipes.

One new feature in Mario Kart Tour? The pipe. Nintendo is now obsessed with “firing off the pipe.” For five rubies, you can flick the classic green warp pipe to reveal a new character, kart, etc. It’ll help you unlock vehicle customizations more quickly, but of course, as in all free-to-play games, it’s a limited resource.

Want more rubies for more chances? You’ll have to pony up real cash if your racing record isn’t helping you earn them quickly enough. You can buy a Gold Pass for $4.99 a month or rubies in packs of three, 10, or more. It’s every parent’s nightmare, and it’s no doubt why you’re required to log into your Nintendo account before getting started.

As a mobile-only release, Mario Kart Tour was always going to be a distinct property from the Switch edition (Mario Kart 8). Some of the changes, like the features mentioned above, are out of necessity; others seem to be driven (pun fully intended) by Nintendo’s desire to make this game accessible to newcomers to the Mario Kart universe.

Instead of each cup comprising four races, you’ll race your way through three before being introduced to a new challenge or tutorial to illustrate an essential racing skill. It’s a clever way to introduce rocket starts and drift boosts to players who might not otherwise have known those features existed. If you’ve been riding for decades, you probably already figured them out. As you unlock more cups and speeds, you’ll also find the caliber of the competition ramps up. What seemed like an easy victory in your first 50cc race will be a hard-fought battle in 100cc (“fast”) and 150cc (“very fast”); let’s not even speak of 200cc (“too fast”), in part because it’s hidden behind the Gold Pass subscription fee.

You’ll also spot another big difference: Each race is only two laps instead of the traditional three, ensuring matchups end pretty quickly.

Mario Kart Tour doesn’t appear to offer multiplayer racing for local matches, but it does have a game mode that’s unique. Coin Rush, accessible for a few rubies (naturally), lets you race through a coin-encrusted level as a seemingly magnetized Gold Mario, raking in every gold, red, and blue coin in sight.

On the items side of things, Mario Kart Tour brings a few new souvenirs to the mix, including Banana Barrels, Mushroom Cannons, Bubbles (shields and speed), Hearts (shields), Yoshi’s Eggs (which explode into additional gifts), Bowser’s Shells, and “Item Frenzy,” which is basically an unlimited supply of something if you get three in a row. If it sounds like hitting the jackpot on the slots machine, that’s because it kinda is.

At the time of this writing, there are eight cups available (after winning a certain number of stars, of course), with more on the way in less than 12 hours. The first theme, the New York Tour, is slated to run for the first two weeks, before presumably being updated to a new set of levels. Completionists, beware: This game could suck a lot of your time—and battery life—if you try to max out every conceivable level and configuration for every tour.