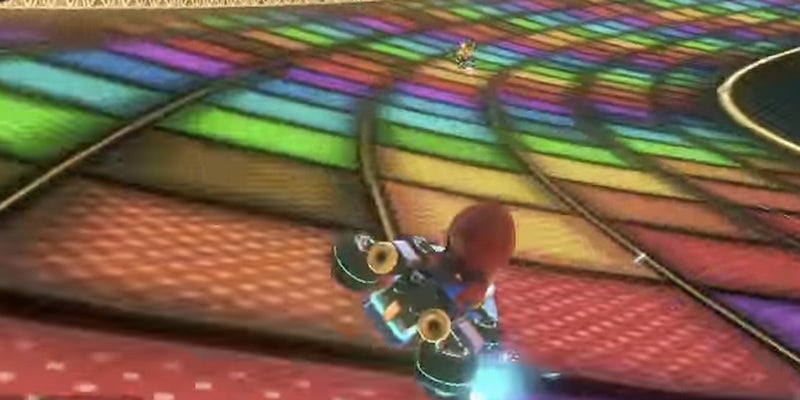 Battle Mode won’t be the same after ‘Mario Kart 8’

Everything you once cherished is now dead, at least when it comes to Mario Kart. With Mario Kart 8 set to launch at the end of this month, fans are beyond excited. Finally, players will get to experience a fully customizable Mario Kart in HD. Nintendo, however, has opted to make some changes to the tried-and-true formula, most notably regarding Battle Mode.

In past iterations of Mario Kart, players would be set in a square arena with three balloons floating over their character. When one player would hit another with an item, one of those balloons would pop. The arenas themselves were an integral part of the experience. Kind of like Twisted Metal, players would start on separate parts of the arena, squaring in on their first victim. Now it seems that arenas are gone, traded for traditional tracks.

The tracks are based on the in-game race tracks, but they’re simplified and wider to allow better combat play. The problem here arises that many tracks end up feeling the same. Although they are all based on different levels, ultimately you end up going in a loop trying to hunt down players to hit.

The great thing about battle mode in the past was that there was little space in which to hide. For the most part, the game was fast and frantic. Now, since the tracks contain turns and chicanes, it’s very easy to hide in a certain spot with a shell, waiting for an opponent to pass by. “Players won’t know when a rival will appear from around the corner,” said game director Kosuke Yabuki in an interview with Edge earlier this month.

Another big change is how many players populate each battle. Gone are the tradition four-player battle arena. Mario Kart has been designed for “12 players, including the CPU.” Clearly, human players can easily disband of the AI opponents, but it’s when the battle comes to an end “between just human players, that’s the real thrill of it.”

Ultimately, it remains to be seen how people will embrace the new Battle Mode. So far many critics have been left unimpressed, but only time will tell.