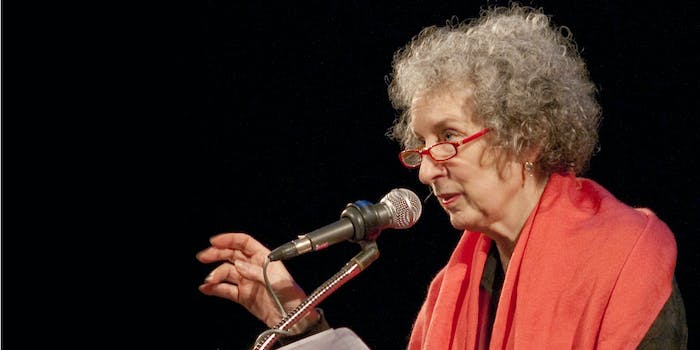 She points to a scene from the first movie.

Star Wars has influenced much of our culture over the years, but now The Handmaid’s Tale author Margaret Atwood is drawing a new comparison that’s raising some eyebrows.

Ahead of The Handmaid’s Tale’s second season, Atwood sat down with Variety for a wide-ranging interview, where she said that the long-running sci-fi franchise and the 9/11 attack on the World Trade Center have more in common than you think. She made the connection while talking about a 2000 opera adaptation of The Handmaid’s Tale, which featured footage of the Twin Towers being destroyed.

Atwood says that the inspiration behind the attack on the World Trade Center came from Star Wars. Variety’s Ramin Setoodeh stopped to ask, “Do you really believe that?”

“Remember the first one?” Atwood said. “Two guys fly a plane in the middle of something and blow that up? The only difference is, in Star Wars, they get away. Right after 9/11, they hired a bunch of Hollywood screenwriters to tell them how the story might go next. Sci-fi writers are very good at this stuff, anticipating future events. They don’t all come true, but there are interesting ‘what if’ scenarios.”

It’s true that Homeland Security has consulted with science fiction writers in the years following 9/11.

Atwood could be talking about the first Star Wars movie, which features an attack on the Death Star by the Rebel Alliance as they try to reach the thermal exhaust port that led to the ship’s reactor core (and is destroyed by Luke Skywalker). Or Atwood could possibly be referencing the end of Return of the Jedi, which shows Lando Calrissian and Nien Nunb navigating the Millennium Falcon into a second Death Star that’s still in the midst of construction. And the original Star Wars trilogy was influenced by real-world events.