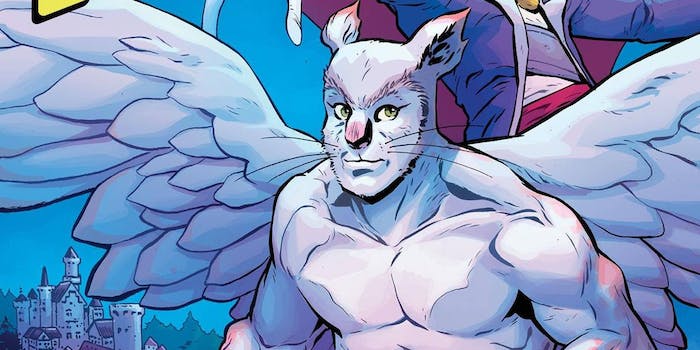 Living legend Margaret Atwood is back in the public consciousness thanks to the political prescience of her dystopian fiction. But while a new generation discovers The Handmaid’s Tale, Atwood is hard at work on a very different project: the ongoing comic series Angel Catbird.

Created in collaboration with artist Johnnie Christmas and colorist Tamra Bonvillain, Angel Catbird is an old-school superhero comic about a geneticist who accidentally becomes a human/cat/owl hybrid. In a pulpy, pun-filled adventure story, he teams up with a group of half-human, half-cats to defeat a rat-obsessed supervillain.

With Vol. 2 out on Feb. 14, we spoke to Atwood about her lifelong love of comics, the animal safety message of Angel Catbird, and the science behind making rats the villains of the story. 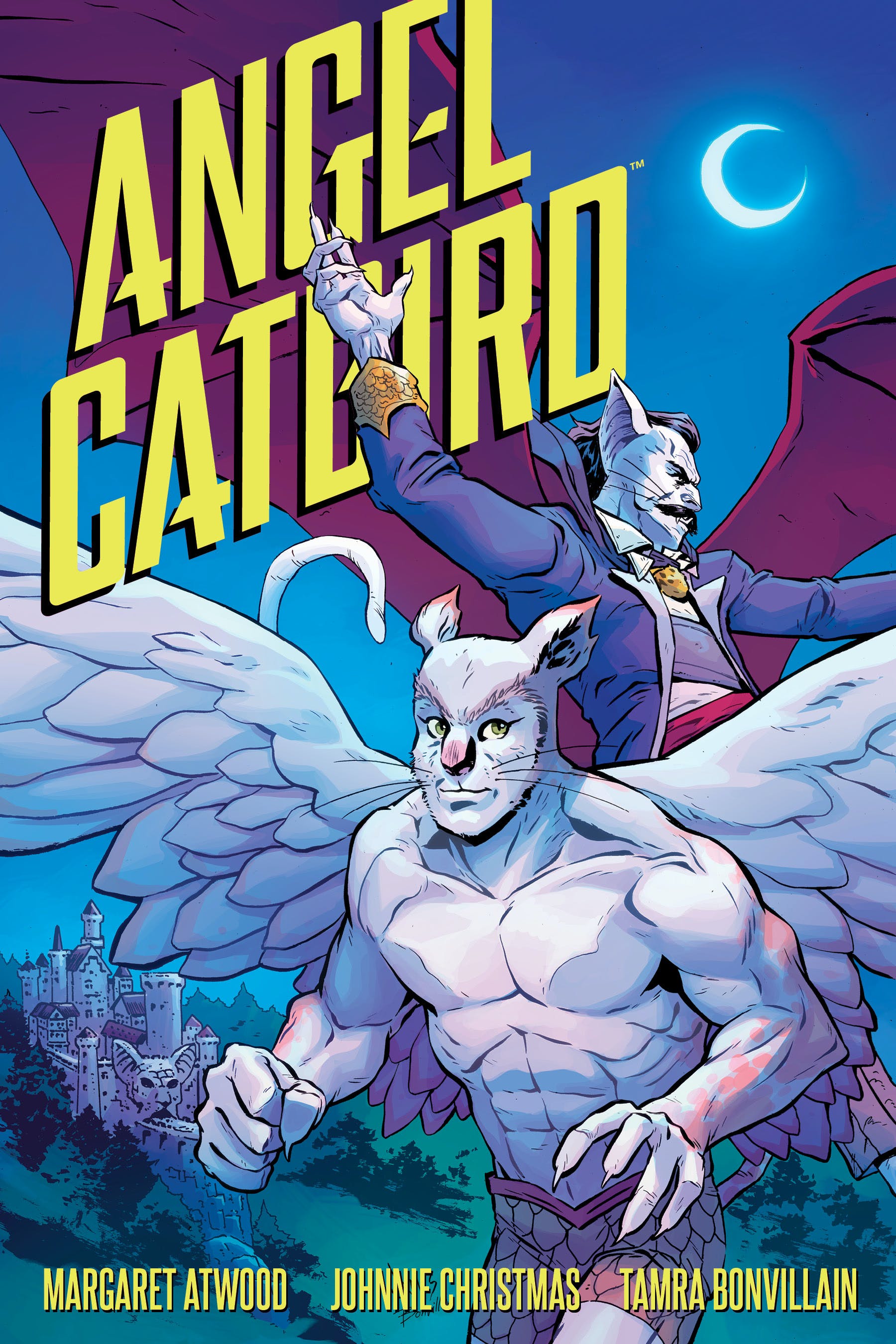 You wrote in the preface to Vol. 1 that you grew up with comics. Could you tell me a bit about your favorite comics from that period, and how they influenced the retro style of Angel Catbird?

During World War II in Canada, you couldn’t import colored comic books from the U.S. So a sort of cottage industry sprung up for black and white comics, which then rapidly disappeared as soon as the war was over, and a flood of colored American comics arrived—the Mickey Mouses, the Captain Marvels… and Wonder Woman, who had been quite big in the States during the war. But the ones that I really liked the most were Batman and Plastic Man and Little Lulu, which was very funny in those days.

You’re primarily known for your work as a novelist. What was it like to collaborate with Johnnie Christmas? How does your creative partnership work?

Having been somebody who wrote a lot of television and film scripts in the ’70s, collaboration was not new to me, because of course you can’t make a movie all by yourself. Writing the script for a comic is very similar to writing the script for a film or television show, except you don’t call them scenes, you call them panels. But you put the same sorts of descriptors in. You say: “Night. A forest.” And then you say what is happening in the forest. Who is there, what they’re saying, whether it’s a long shot or a close-up, the expressions on their faces.

So you write the script and then you share it with your team members, who in my case are the editor, the comics entrepreneur who put the whole thing together, and Johnnie Christmas. And everybody has their things to say about it, and that is the process that goes on all the way through. I do the script, Johnnie Christmas does thumbnail sketches, we all look at those, he then does pencils and we look at those, and then he does ink.

Now you’ve wrapped up work the third volume and the second one is about to come out, do you think your work as a comics writer has developed over these three volumes?

I’ve always drawn comics so I can’t say that I was unfamiliar. Just that my comics drawing style is very lumpy, so I didn’t feel I was the right person to draw this one. And I’ve just done another script for Hope Nicholson, who’s doing a volume called The Secret Loves of Geeks. She did one called The Secret Loves of Geek Girls and I did something for that, which I drew. But as I say, it’s lumpy. This time I’m working with an illustrator.

So… what’s that comic about?

I’m not telling you, it’s a big surprise! They’re all shorties, they’re like five pages. 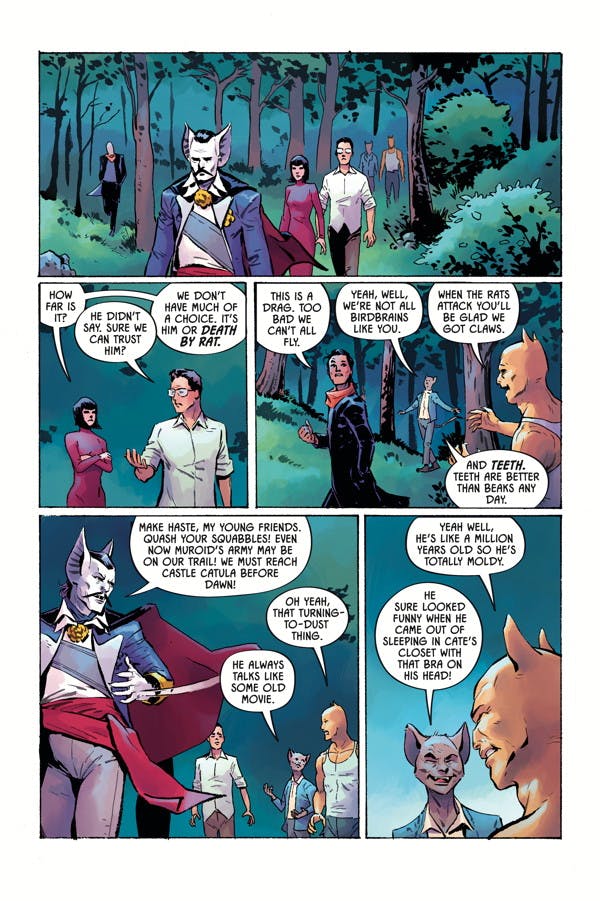 Angel Catbird has a pretty clear educational goal in mind. After Vol. 1, have you heard anything back from schools or wildlife organizations regarding the comic’s message about cat safety?

We gave them a big boost for their associated website, which you can see at catsandbirds.ca. It gave them more publicity than I think they’d ever seen in their life. The thing about the comics world is it has a huge number of outlets of people that are interested, so each one might not have millions of readers, but collectively they do have a lot.

So Angel Catbird now has a devoted fan club, unlikely though it may seem. But the one who really has a devoted fanclub is Count Catula. I think he could have a whole comic devoted to nobody but him.

Has anyone named their cat after him?

I would be surprised if they hadn’t. I know there are several Margaret Catwoods who are cats. So I would hope that Count Catula has some namesakes.

We got our first cosplay in the fan expo in Toronto, somebody actually turned up with a beautifully made outfit of Cate. Everything, every detail was there. Johnnie was very impressed, he said usually cosplay doesn’t show up for two or three years.

I’m wondering if this is something you’ve ever been asked before actually, but regarding the comic’s wildlife safety themes, were you ever concerned about unfairly maligning rats by casting them as the villains?

There are two very well-behaved pet rats in the strip, their names are Esmeralda and Ophelia, and they’re the white rats that bad rat is keeping captive so he can turn them into lady rats.

I did notice that in this issue, and I was like, “We’ve got some positive rat representation for the rat fans in the audience!”

Yes, yes, we were careful of that because rats are very smart! They’re just unfortunately too numerous in certain places. In fact, should rats be controlled, a third of the world’s food supply would be saved. And that has an impact on global warming because if you don’t have to cultivate a third more world, you can see how it would have a positive impact. They’re pretty destructive, worldwide, and all due to us. They’re in a symbiotic relationship with us. If it weren’t for us, they wouldn’t have this other species that so kindly provides [them] with garbage.

For Angel Catbird, do you keep a notebook full of cat puns or do they just come very naturally?

I’m sorry to say that they come very naturally, and so do the rat puns you’re about to get. It’s a bad habit of mine, but my excuse is James Joyce.

So finally, what comics are you reading at the moment?

I’m reading Black Hammer. I think they’re about up to issue #9, it’s by a guy named Jeff Lemire. There are some amazing comics out there, I don’t know whether you know David Mack’s Kabuki series? It’s gorgeous, he draws beautifully. There’s another one, a comic of the ’90s called Blacksad. He’s actually a cat detective who solves crimes. It’s a gritty noir underworld, strange, beautifully drawn, exceptionally well executed.

I ran across a very funny one that’s quite new, called Lady Killer. A ’50s housewife who doubles as a kind of James Bond assassin. Not only does she assassinate you, but she then gets out her rubber gloves and her mop, and cleans up.

I was at Comic-Con in the summer and I saw a huge range of comics for every possible sector of the populace. It’s very varied and inventive right now, it’s at one of those points in its cycle in which a lot of people are thinking of new things to do in the form.