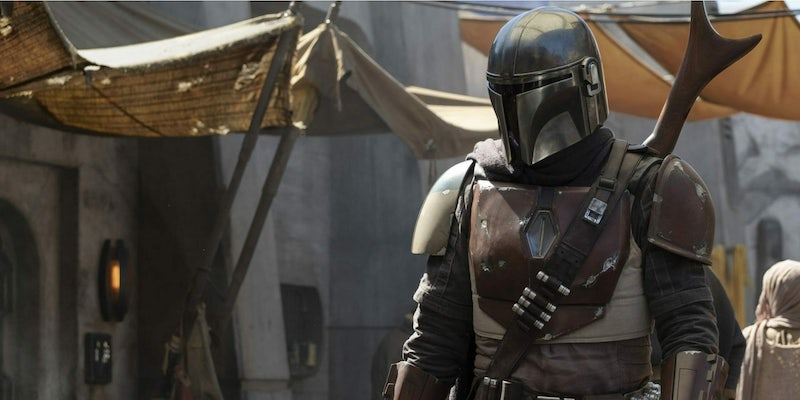 The trailer promises movie-level production values, but the show's story is still a mystery.

Two weeks before The Mandalorian premieres on Disney+, the second trailer arrived. The titular bounty hunter character remains as enigmatic as before, but we get a much better look at the supporting cast and action scenes, along with some satisfyingly big-budget production values. Once again, Werner Herzog’s distinctive voice plays a major role.

Disney+ also released its first poster for The Mandalorian, full of elements familiar to Star Wars fans. The titular Mandalorian is in full armor on a desert planet as his ship, the Razorcrest, and two suns loom in the background. You can also spot moisture vaporators and sandcrawlers.

While these desert fixtures can certainly exist on other planets in the galaxy far, far away, some of the elements in the poster are also present on Tatooine. It’s not only Anakin and Luke Skywalker’s home planet and one of Star Wars‘ most notorious worlds, but between Jabba the Hutt’s grip on the planet (which would’ve ended prior to the start of The Mandalorian) and its less-than-stellar reputation, it wouldn’t be surprising if we returned there once again. A couple of scenes in the trailer also look a lot like Tatooine, although the cracked desert landscape is probably somewhere else.

The Mandalorian is the first live-action Star Wars TV show—unless you count the 1978 Star Wars Holiday Special, which Disney would prefer we all forgot. With a $100 million budget for 10 episodes, The Mandalorian is expected to be on par with Game of Thrones. Created by Jon Favreau (Iron Man), it features an impressive creative team that includes Thor: Ragnarok director Taika Waiti.

As of July 2019, Favreau is already working on pre-production for season 2, suggesting the show is all but guaranteed for renewal.

Ludwig Göransson, whose previous work includes Black Panther, Creed and Creed II, Venom, and Community, will compose the score for The Mandalorian.

“Words fail to express how surreal and humbling it feels to be invited into the Star Wars universe,” Göransson said in a statement. “I am deeply grateful to Jon Favreau and Disney for this opportunity and to John Williams for raising the bar so high with his iconic, intrepid scores — they will never be matched. In these next months I hope to honor the tradition of Star Wars’ musical landscape while propelling The Mandalorian into new and unchartered territory. And I will try to remember that there is no try.”

On Oct. 3, 2018, showrunner Jon Favreau shared a synopsis for The Mandalorian on his Instagram page:

“After the stories of Jango and Boba Fett, another warrior emerges in the Star Wars universe. The Mandalorian is set after the fall of the Empire and before the emergence of the First Order. We follow the travails of a lone gunfighter in the outer reaches of the galaxy far from the authority of the New Republic.”

Mandalorians are a culture from the planet Mandalore, known for their combat skills and distinctive armor—hence why the photo looks a bit like Boba Fett. Boba and Jango Fett both wear Mandalorian armor and helmets, but if you’re familiar with Star Wars extended canon, you’ll know plenty of other Mandalorian characters, like Sabine Wren in Star Wars: Rebels. We don’t know the identity of The Mandalorian‘s gunfighter protagonist, but it’s thought to be a new character.

Favreau’s synopsis suggests a Wild West kind of story, and the timeline is pretty open. There’s a 30-year gap between Return of the Jedi and The Force Awakens, giving plenty of room to maneuver.

Favreau and Dave Filoni also told Entertainment Weekly that The Mandalorian would explore the origins of the First Order, which was previously touched upon in tie-in novels. By the time that The Force Awakens takes place, the First Order emerges as a fully established force to be reckoned with, but it wasn’t always like that. The First Order had to start somewhere, and Filoni suggests that the very nature of the New Republic being stretched thin could’ve played a part.

“Also, what could happen in the 30 years between celebrating the defeat of the Empire and then the First Order?” Favreau said. “You come in on Episode VII, [the First Order are] not just starting out. They’re pretty far along.”

Favreau is currently listed as the only writer, having conceived the show with Lucasfilm producers Dave Filoni, Kathleen Kennedy and Colin Wilson. He’s had plenty of experience with big-budget productions like this, directing blockbusters like Iron Man and The Jungle Book.

StarWars.com announced the show’s directors on Oct. 5, 2018, and it’s an intriguing list. Star Wars animation mastermind Dave Filoni will direct the first episode, with later episodes directed by Deborah Chow (Jessica Jones), Rick Famuyiwa (Dope), Bryce Dallas Howard (best known as an actress in films like Jurassic World), and Taika Waititi (Thor: Ragnarok). Not only is that a cool team with some interesting credits to their names—but it also means Disney finally hired some directors who aren’t white men.

Pascal will portray the Mandalorian at the center of the show, although his character’s name has yet to be revealed. Gina Carano plays a former Rebel shock trooper named Cara Dune, Carl Weathers plays a bounty hunter called Greef Carga, and Omid Abtahi plays someone named Dr. Pershing. Taika Waititi will voice the droid IG-11, who’s commonly mistaken for the much more famous droid bounty hunter IG-88 even in the world of The Mandalorian.

Other cast members include Giancarlo Esposito as Moff Gideon (who used to be an Imperial governor), Emily Swallow, Werner Herzog, and Nick Nolte. Now the trailer is out, we know that Natalia Tena is in the cast playing a Twi’lek character.

Disney CEO Bob Iger revealed at the 2019 D23 Expo that Ming-Na Wen (Agents of S.H.I.E.L.D., Mulan)—who was being honored during the Disney Legends ceremony—was part of the Mandalorian cast, although he didn’t give any details about what character she would play or voice.

The Mandalorian will premiere Tuesday Nov. 12, the same day that Disney+, Disney’s new streaming service, launches. The first episode will air then, followed by episode 2 on Friday Nov. 15, and new episodes arriving each Friday until the finale on Dec. 27.

The first Mandalorian trailer introduces several gorgeous new locations, along with enigmatic glimpses of the main cast.  With movie-level production values and plenty of cool new characters, it’s a great teaser for a show that remains surprisingly mysterious. The title character (played by Pedro Pascal) doesn’t even speak or remove his helmet. We get a glimpse of some people frozen in carbonite like Han Solo, and Werner Herzog provides one of his signature threatening monologues.