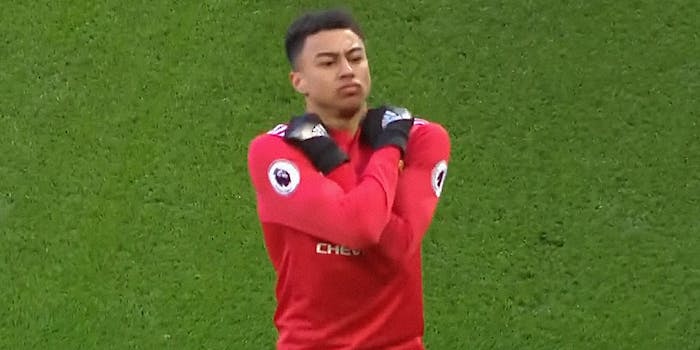 It's gone beyond Wakanda.

The salute that T’Challa and Shuri give to one another in Black Panther is catching on as fans pose with theater displays after seeing the movie. But it’s beginning to take on a life of its own with professional soccer players incorporating it into their own celebrations.

Manchester United midfielder Jesse Lingard scored what would become the game-winning goal against Chelsea with a header into the net nearly 75 minutes into the match. He ran around the pitch and celebrated with his teammates, but he also crossed his arms into a Black Panther-style salute with a teammate.

NBC Sports’ footage of the goal doesn’t show who Lingard is enacting the gesture with, but photos of the moment from a different angle reveal that Lingard shared the moment with fellow midfielder Paul Pogba. And both Lingard and Pogba confirmed that the moment was a tribute to Black Panther and Wakanda.

Less than two weeks ago, Black List founder Franklin Leonard said that we would probably see the gesture mixed into celebrations by the end of February. Indeed it wasn’t the only Black Panther salute from the weekend. Huddersfield Town midfielder Collin Quaner and his teammate Steve Mounie also celebrated a goal with the salute.