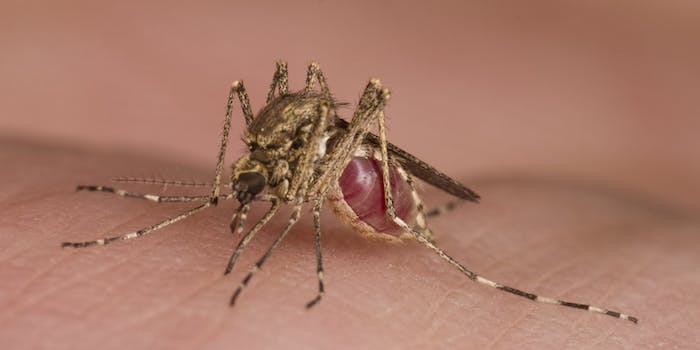 Is that a new perfume? Nope—malaria.

A malaria infection is no good, of course—but it might actually be worse than previously believed.

Scientists now think that malaria actually makes mosquitoes—you know the annoying critter that gave you the disease in the first place—want to bite you even more. Ick.

Researchers discovered that malaria parasites use their host’s own body odor to mix up mosquito-attracting scents, at least in mice. They reported their findings this week in the Proceedings of the National Academy of Sciences, USA. The scientists wafted the scent of both malaria-ridden and parasite-free mice toward some Anopheles stephensi mosquitoes. The mosquitoes were more attracted to the malaria-infected mice.

Like a lot of parasites, the organisms that cause malaria (protozoans in the genus Plasmodium) have a complex life cycle. Malaria parasites depend on two hosts: mammals, like humans, and mosquitoes. Mosquitoes aren’t affected by the parasite, but they do carry it to the next host.

The new finding is just the latest example of the way a parasite manipulates its host so that it can complete its life cycle. The natural world is rife with parasites that tweak their hosts’ behavior and chemistry. Rats carrying another parasite don’t fear cats, instead they might get sexually attracted to them. Some fungi make their insects hosts crawl up a stalk of grass or a tree until they are high enough to spread fungi spores when the die. Seriously, you need to check out those fungi:

The eau d’ mosquito-attractant effect in the new study was most pronounced during a 10-20 day window after the mice were infected, just when they carried the highest levels of parasite in their blood and were most likely to pass on malaria.

The finding might also hold true for humans, but that hasn’t been tested yet. A 2005 study in Kenya did find that kids harboring an uninfectious stage of the parasite attracted about twice as many mosquitoes as the other kids did. But that study didn’t pin down a reason why.

To figure out what caused that difference, the researchers looked at chemicals that make up the mouse’s body odor. Indeed, they found that the infected mice had a distinctly different body odor profile. The researchers found four chemicals that the mosquitoes seemed to like and one that drove them away. That information could help us develop sprays that either mask the attractive odors or enhance repellant ones, and potentially save lives. Half of the world’s population is at risk of malaria. And about 627,000 people died of malaria in 2012, according to the World Health Organization.

Hosts who don’t appear to be sick play a big role in the disease’s spread. “One of the major potential values of this research is if it can help us identify people who do not show symptoms of the disease,” Mark Mescher, an entomologist at Pennsylvania State University who worked on the study, told the BBC. Fortunately, research like this is helping us fight back against the disease.

There is still one mystery: “[What] the hell [do] the parasites do to modify the odor profile of their host?” asked Theirry Lefèvre, a researcher at the French National Centre for Scientific Research and the Institute of Research for Development in Montpellier, in an interview with The Scientist. He wonders if the parasite was altering the mouse’s metabolism or if the mouse’s own immune system produces the changes as it tries to get rid of the protozoans.

At least this parasite doesn’t screw with your brain. Or maybe we just haven’t found the evidence for that yet.