Maisie Williams likely to play Ellie in Last of Us movie

Maisie Williams believes that it's likely she will play Ellie in the Last of Us movie.

It looks like Maisie Williams is continuing talks with producer Sam Raimi, and writer Neil Druckmann, about playing Ellie in the Last of Us movie adaptation.

The actress, known best for her role as Arya Stark in HBO’s Game of Thrones, said in an interview with IGN’s Luke Karmali that “it’s looking like ‘yes.’”

It all started last year when a fan tweeted at Williams claiming that she would make a great Ellie in the Last of Us movie. It all kind of snowballed from there, where writer Neil Druckmann and IGN’s Greg Miller chimed in. Since then, talks have been going on. 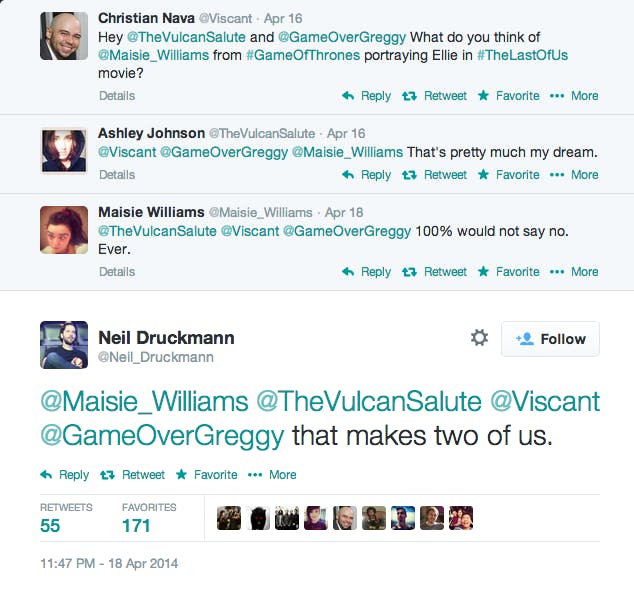 The Last of Us is a Sony exclusive action-adventure horror video game that was released back in 2013 for the PlayStation 3. The game was praised for its gritty and dark take on post-apocalyptic survival. The game received over 200 game-of-the-year awards, and has become a hallmark for the emotional impact video games can bring.

According to the interview, Williams was even asked to moderate a Last of Us panel during San Diego Comic Con earlier this year, but felt that with her busy schedule she couldn’t give the game enough time to sound knowledgeable. Druckmann himself said “we almost had her come out for this panel.”

Oddly, Williams did say that “there’s no script, no director, and no anything else.” which is an odd statement because Ricky Cambier, lead designer over at Naughty Dog, tweeted this back in August.

With any kind of movie project, things can move slowly as all the pieces need to fall into place. There’s still no release date for when the movie will come out, assuming it does.