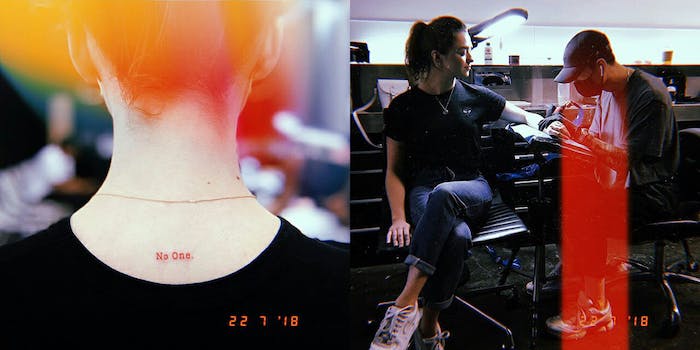 Fans will recognize the words.

It’s the end of an era for the Game of Thrones cast, which recently finished filming the series after nearly a decade together, and Maisie Williams has celebrated it with a tattoo fitting for Arya Stark.

Williams, who has played the Stark daughter-turned-ruthless-assassin since the very beginning, followed in the footsteps of most of the Avengers and the Lord of the Rings cast by marking the end of her time on the show (spanning nearly a decade) by getting some ink. Posting to Instagram, she shared photos of three tattoos she got at Bang Bang NYC by Sanghyuk Ko, who also recently tattooed Williams’ Game of Thrones co-star Sophie Turner.

One of the tattoos, located on the back of her neck, were the words “No One.”—a reference to Arya’s time with the Faceless Men in Braavos—in red.

She also got the words “little rascal” tattooed on her left arm (also in red ink) and a daisy on her right arm. (Williams has a social media app called Daisie.)

It’s also not the first Game of Thrones-related tattoo among the cast. Last month, artist Lauren Winzer revealed that she tattooed the Stark direwolf sigil and the words “The Pack Survives.” on Turner.

With season 8 not coming out until 2019, even more Game of Thrones tributes—both permanent and otherwise—are sure to come from the cast.