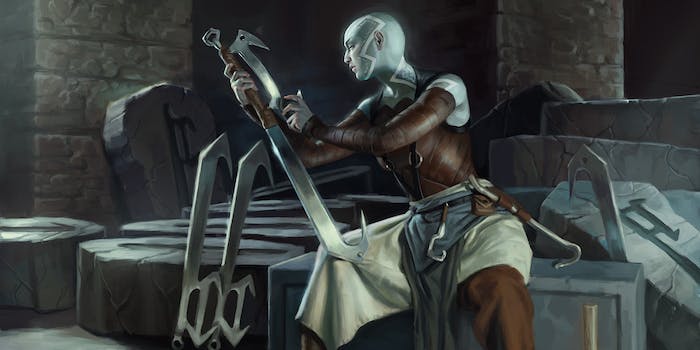 2 cards in Magic: the Gathering’s upcoming Oath of the Gatewatch expansion

Warning: This story contains spoilers for Magic: the Gathering Oath of the Gatewatch.

Fans of Magic: the Gathering rejoice! The game’s newest expansion, Oath of the Gatewatch, is almost upon us.

That means while the holiday season is wrapping up, spoiler season is about just beginning. We’ve got two exclusive cards from the upcoming set for you to feast your eyes on, so sit down and stay awhile.

The game’s previous expansion, Battle for Zendikar, had fans chomping at the bit for a new kind of card, the ultra-rare Expeditions. These premium cards are printings of old classics and new favorites alike, featuring full-card artwork and a shiny, foil printing. Many fans of the game were speculating that their addition in the set could see it become the highest-selling MtG expansion ever.

Battle saw 25 of these Expeditions inserted into booster packs, and true to their word, the folks over at Wizards of the Coast, the creators of Magic, have added 20 more Expeditions for Oath. Allow me to present: 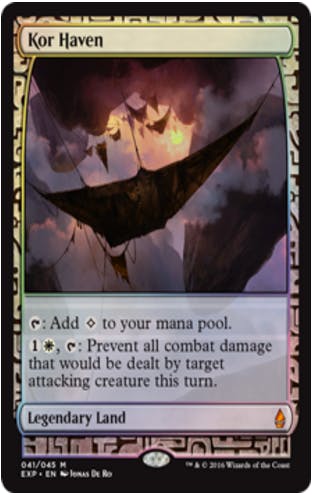 Kor Haven is a card that hasn’t been printed in almost 15 years, since it was a part of the Nemesis expansion in the Mercadian Masques block. Despite this, the card is still worth about $5, as it sees consistent use within the Commander format.

Commander is a “singleton” game mode (i.e. only one of each card is allowed), and the second ability of Kor Haven is functionally identical to that of Maze of Ith. Both essentially remove an enemy attacker from combat, protecting yourself at very little cost. These cards are very popular within “pillow fort” Commander decks, which aim to create an insurmountable fort around the player, from which they can create an unbeatable win condition (like taking infinite turns or removing all the cards from opponents’ decks).

Also of note is Kor Haven’s first ability, which features the brand-new colorless mana symbol. The grey “diamond-within-a-circle” symbol will now be used instead of writing out “colorless mana.” This change was made, starting with Oath, to differentiate colorless mana, which can only generated from cards featuring the diamond symbol, from generic mana, which appears in a card’s cost and can be paid by any color of mana, including colorless.

In Oath of the Gatewatch, Kor Haven is only playable within Draft or Sealed games, but will likely be a fairly strong powerhouse should a player build their deck around it. The card serves as great removal and will have opponents scratching their heads on how best to attack, allowing the Haven’s owner time to set up a brutal assault of their own.

What kind of assault, you ask? Well, let’s take a look at the second spoiler we have today: 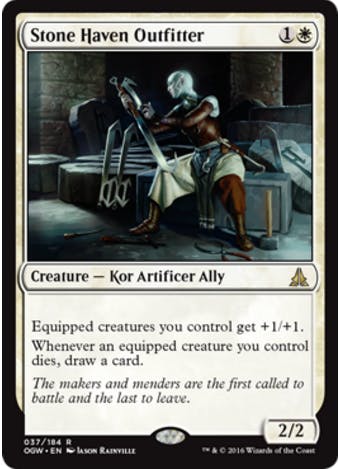 This rare Ally looks to be fairly powerful, especially as a “build-around” card. Her cheap cost combined with powerful abilities should make her a fairly high draft pick, especially if a player ends up with a lot of equipment.

In fact, Outfitter may even be good enough to include in constructed decks. Her ability to draw a card upon the death of your equipped creatures could theoretically be used to draw many cards throughout a single game, and is reminiscent of Skullclamp, one of the most powerful equipment cards in the game. Combined with sacrifice outlets and multiples of Stone Haven Outfitter on the board, the Kor Artificer could turn into a powerful combo piece for clever players to utilize.

A new year is almost upon us, and with Oath of the Gatewatch just around the corner, Kor Haven and Stone Haven Outfitter will surely be exciting cards for players to open at prerelease tournaments and beyond. Oath hits stores on Jan. 22, just in time to break your New Year’s resolution not to buy a bunch of Magic cards! Don’t worry, you definitely won’t be alone.