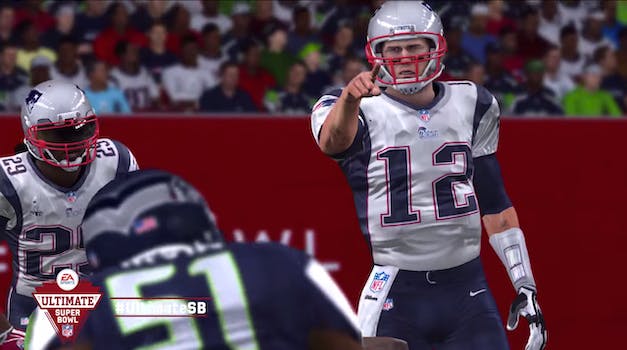 The final score was not the only thing the simulation got right.

Nobody could’ve predicted the final outcome to Super Bowl XLIX. However, something did predict the final score.

The correct prediction of Sunday night’s game came not from a sports pundit on somewhere like NBC or ESPN, but rather from Madden 15, which ran a simulated version of the Super Bowl last week.

Not only did it pin down that the New England Patriots would beat the Seattle Seahawks 28-24, it also got Julian Edelman’s game-winning touchdown (as well as the play that made it happen). It nailed Tom Brady winning Super Bowl MVP, and it predicted that the Patriots would be down 24-14 in the third quarter of the game.

It’s not a perfect simulation of the game. Madden 15 got the end score right, but it missed the call on the first three quarters of the game. It also missed the controversial, ill-fated call in that final minute, and the brawl that followed the interception. Still, good effort; there’s no mention on whether DeflateGate was an issue for for Madden’s Patriots.

And EA Sports, who produces the Madden games, owned it.

What seems like a rare one-off has happened surprisingly often. EA Sports’ Madden Super Bowl has correctly predicted nine of the past 12 Super Bowls. But the simulation becomes even more impressive when you look at the numbers.