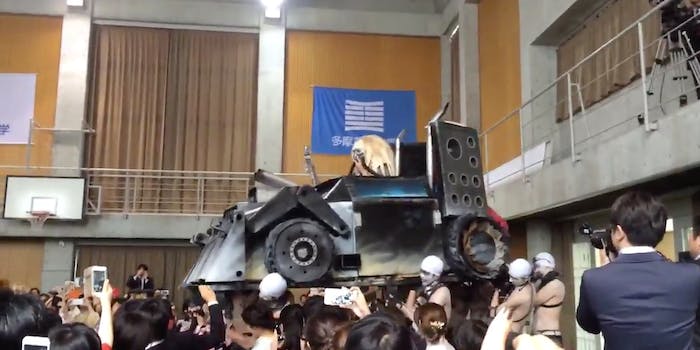 Students at Japan’s Tama Art University used Immortan Joe, his War Boys, and Coma-Doof warrior (the guy with the flaming guitar) as inspiration for their graduation outfits. It’s one thing to don white paint and possibly construct Immortan Joe’s breathing rig, but it’s quite another to include a vehicle for the occasion to carry Immortan Joe and Coma-Doof Warrior in the room.

It was a team effort, but all of those War Boys got Immortan Joe and Coma-Doof Warrior to the ceremony right on time. The guitar didn’t shoot out flames, but that was probably a good thing.

According to one person who tweeted out photos, the girl who cosplayed as Immortan Joe was a product design major who later exited the ceremony wearing a Hakama, or a traditional Japanese dress.

It might be an incredible Mad Max cosplay, but it could also equally double as a metaphor for the post-grad life along the road for them.