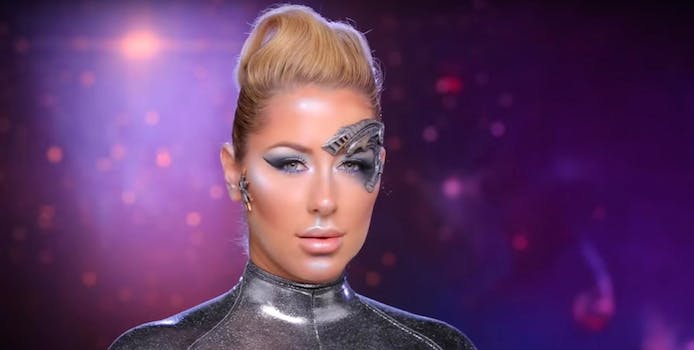 You can boldly have a look that honors Uhura, Troi, Vina, or Seven of Nine.

Thanks to MAC Cosmetics‘ official 50th anniversary Star Trek collection, fans can add a little bit of adventure to their makeup bags.

The new line includes eye shadows, lip sticks, powders, and more, available now online and soon in stores. And, if you want to feel like you just beamed over from the Star Trek universe, four makeup tutorials recently posted by MAC Cosmetics on YouTube can help you create looks inspired by the iconic women in the series.

The tutorials feature looks inspired by Uhura and Vina from The Original Series, Deanna Troi from The Next Generation, and Seven of Nine from Voyager.

Each one uses a variety of MAC products. Some are from the Star Trek line and some are not. The video descriptions list the products used so you can reference it if you want to use exactly what’s in the tutorial for your own look. The videos also include short blooper clips at the end—because who hasn’t had a hilarious makeup mess up.

For all of the videos MAC partnered with makeup artist Chrisspy, who does a good job of explaining each step. It would be nice to see a diverse range of artists and models with a variety of skin tones in the future, so different fans can see what might work for them. While these appear to be the only Trek tutorials shared on MAC Cosmetics’ official YouTube page, MAC senior makeup artist Dominic Skinner shared a shorter Uhura tutorial on his Twitter account.

The Star Trek collection is set to arrive in North American stores Sept. 1.