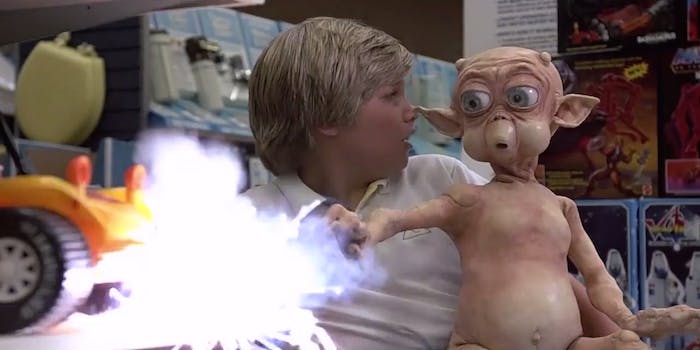 Some madman mashed up ‘Mad Max’ and ‘Mac and Me’

Combining two films with nothing in common except a vaguely similar aesthetic equals greatness.

If you’re a connoisseur of bad movies, then you probably still haven’t made it through Mac and Me, an unwatchable E.T. ripoff that swept the Razzies in 1988 and features such highlights as a wholly inexplicable dance number filmed at McDonald’s, where its resident alien tap dances while wearing a tacky Ewok-like costume.

But as Vimeo creator Brian Mann proves, even the worst and most unlikely film can be made new again with a sterling mashup. Mann has taken the first trailer from the new Mad Max movie and woven the plots of the two films together so that a terrible kooky kid’s film is suddenly the harrowing struggle of one alien’s race to survive in a desolate wasteland.

With occasional trips to McDonald’s, of course.

This version makes it abundantly clear that the only thing Mad Max: Fury Road was missing was a backup dance group to go with that flaming guitar.