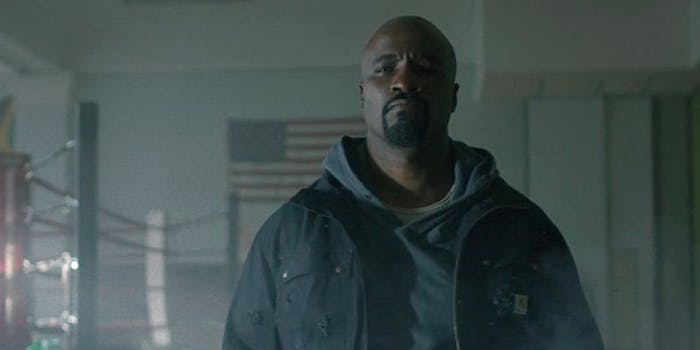 Luke Cage is getting his own Netflix show, and we just got our first look

He's not happy about the state of his clothes.

Netflix has released our first look at Luke Cage, and it’s already highlighting one of the less glamorous parts of being a superhero.

You won’t find this teaser on YouTube or Facebook. Right now it’s just on Netflix, appearing after you finish Daredevil’s second season, which dropped today. Cage already showed up in Jessica Jones, but here he’s on his own as he’s cornered by a group of men in an otherwise abandoned gym for an unknown reason. They’re more than determined to gun him down, but nobody told them that bullets bounce right off Luke.

All it does is leave Luke with another set of clothing full of holes—and he’s tired of buying new clothes. We don’t see what moves he pulls, but the sound of glass shattering is unmistakable.

It’s only 24 seconds of goodness, but we’re already fully onboard. The teaser also debuted the logo for Luke Cage, which stands out from Daredevil’s red and Jessica Jones’s purple hues, but it suits him.