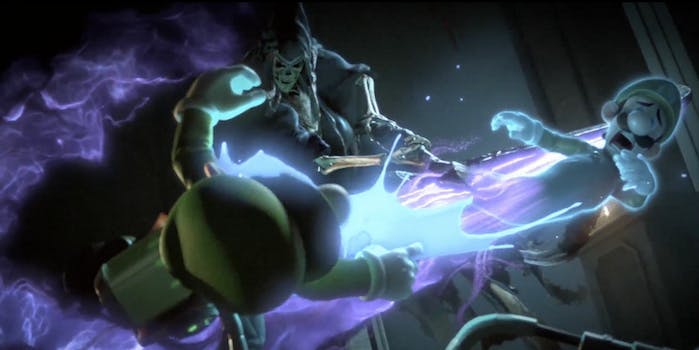 He shall be missed.

It’s been a good year for Smash Bros. fans, what with the multiple 20-minute trailers detailing every single detail about the upcoming Nintendo Switch title, but it’s also been a rough time for everyone’s favorite green plumber. Luigi, who’s been putting the “bro” in Marios Bros. for over three decades, is dead.

How did this travesty fall upon us? The new Nintendo Direct (think an extended trailer) debuted Wednesday morning, starting off with an homage to Luigi’s Mansion, the playful, spooky game that let players journey through a haunted house as Luigi, armed with a ghost-vanquishing vacuum. Luigi can be seen fleeing from mummies, followed by a sentient statue until finally turning around to face the Grim Reaper himself. Without hesitation, the Grim Reaper strikes Luigi, literally cleaving the plumber’s soul from his corporeal form with a giant scythe, sweet Jesus.

It’s all a means to introduce Simon and Richter Belmont, the two primary heroes of the Castlevania franchise, into the Smash Bros. cast. The duo quickly make work of the ghouls haunting the castle, and we see Luigi’s ghost pitifully try to reinsert itself back into his body before another monster scares the wits out of him again.

The internet was quick to react to the sudden demise of Luigi.

Are we gonna ignore the fact that Luigi got murdered in cold blood and is literally staring at his lifeless corpse as a ghost? pic.twitter.com/kzCHAZDI1G

We are shocked and devastated to report that our dear friend Luigi has passed away. Our family asks for privacy during this time as we mourn his loss #SmashBrosUltimate #SmashDirect pic.twitter.com/0AFRVZLW9g

First he gets possessed by a tennis racket in Mario Tennis Aces, then he literally gets his soul ripped out of him in Smash. Nintendo has been putting Luigi through hell this year pic.twitter.com/Idv6ISOCXy

Someone at Nintendo had to look over and approve that animation reveal.
They had to look and say "Yes, this high-definition dead Luigi meets Nintendo's quality standards."

Luigi has had an interesting year. In Mario Tennis Aces, the plumber was possessed by a haunted tennis racket and had his junk exposed for the world to gawk at.

Of course, just because Luigi’s death is now canon (we will not accept rebuttals to this definite fact) doesn’t mean there wasn’t plenty of other awesome Smash Bros. reveals. King K. Rool, the villainous crocodile from the Donkey Kong franchise, showed up to beat the snot out of Kirby’s King DeDeDe. Dark Samus from Metroid Prime 3 and Chrom from Fire Emblem: Awakening are also in the new cast.

Here are some equally juicy reactions to all the Smash Bros. reveals:

> when you hear your mom get home and you didn't put the meat in the sink to thaw like she asked that morning pic.twitter.com/poI0kDltV4

Sakurai thinks he's slick, but I figured out what he left out of the #SmashBrosDirect pic.twitter.com/lJtwvCXZFK