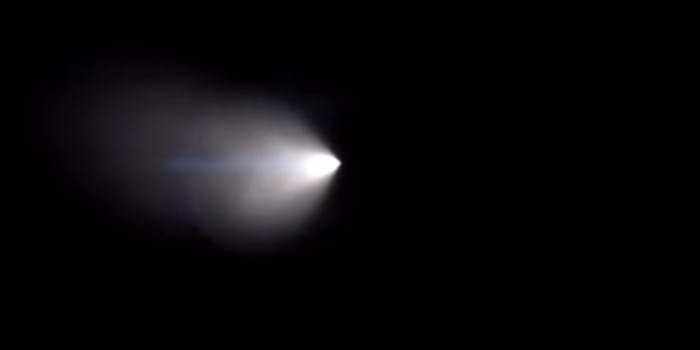 Sorry, that California ‘U.F.O.’ was actually just a missile test

So much for Saturday night's exciting U.F.O. panic.

Los Angeles citizens were excited to spot a U.F.O. on Saturday night, although sadly that flying object has already lost its air of mystery.

Photos and videos of the so-called U.F.O. spread quickly on social media, showing a bright, shining object speeding through the skies above Los Angeles.

Rocket or UFO? Just saw this from my boat in Oxnard pic.twitter.com/ZG6MnVzDO2

Shockingly enough, the bright light was not evidence of an alien invasion. Less than an hour after the photos were posted, the Orange County Sheriff’s department posted this message, explaining that the U.F.O. was actually just Navy missile test.

#OCSDPIO: Light seen in OC sky was confirmed through JWA tower to be a Naval test fire off the coast. No further details.

Since then, the Navy confirmed that the mass U.F.O. sighting was indeed a planned test launch of a Trident II missile, taking place safely over the Pacific ocean.

Social media really does take all the fun out of a good old-fashioned U.F.O. panic.