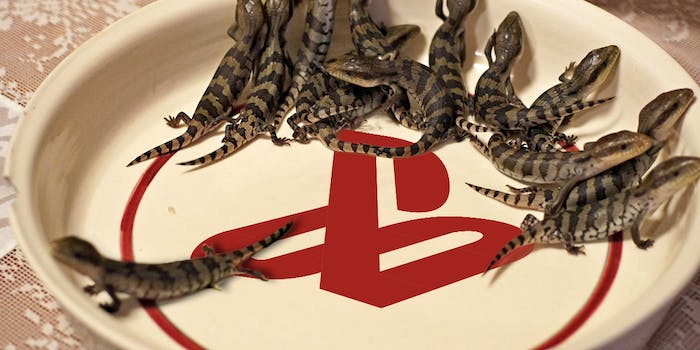 The DDoS spammers known as Lizard Squad are set to give PlayStation fans some holiday blues.

PlayStation Network, the online system for Sony’s PlayStation 3 and PlayStation 4 consoles, was brought down late Sunday night by Lizard Squad, whose previous exploits have downed airplanes with bomb threats, screwed up gaming for World of Warcraft and League of Legends fans, and last week gummed up Xbox Live.

Normally, something like this is more of an annoyance than anything for a company with an online game network. This DDoS attack, however, happens in the shadow of the major Sony Pictures hack that led to the theft of DVD screeners for five upcoming Sony films, over 47,000 peoples’ personal information, and pay rates for visual effects workers on Sony Pictures films (an exposure that will arguably change the way VFX professionals negotiate contracts). The hack also revealed employee communications that indicate dissatisfaction with the movies Sony Pictures is producing.

The Sony Pictures hack demonstrates why no one should refer to Lizard Squad as “hackers.” A proper hack involves the compromising of security systems and theft of data. Lizard Squad, on the other hand, only has one weapon in its arsenal: the network-jamming DDoS attack. It’s still something Sony Computer Entertainment of America would surely rather not have to deal with right now. Not when its parent company has bigger fish to fry, like fixing a security system that’s been called a joke.

We are aware that users are having issues connecting to PSN. Thanks for your patience as we investigate.

As usual, gamers are not happy about the latest attacks.

Awesome take down the online features of only console that works correctly.

And Lizard Squad, as with last week’s attacks on Xbox Live, has labeled their PSN assault as foreshadowing of more fun to come at Christmas.