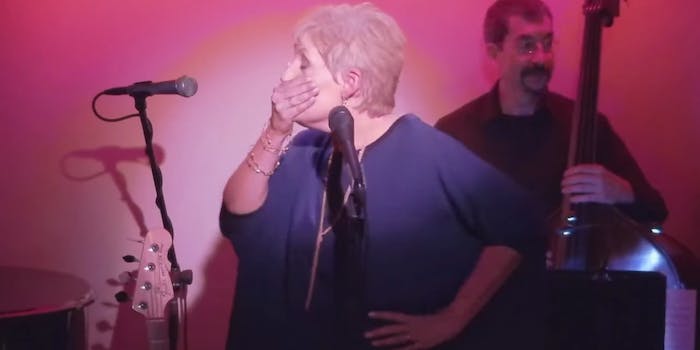 Liz Callaway demonstrates what every Broadway fan knows all too well

And another Sondheim parody flew into our brains.

Musical theater veteran Liz Callaway is best known as the voice behind Anastasia‘s “Journey to the Past.” But she recently turned standup comic when she tackled Broadway’s favorite running joke: how hard it is to sing Sondheim.

Stephen Sondheim may be the legendary writer of West Side Story (he wrote the lyrics), Into the Woods, and Sweeney Todd, but it’s a feat just to get through his songs without flubbing the words. Just ask any vocalist who’s ever tried to get through “Not Getting Married.”

Surely if anyone could master the famously wordy “Another Hundred People,” it’d be Callaway, a true Broadway diva. But as her clever cabaret act proves, a Sondheim song is an exercise in acrobatics for even the most practiced mouth. Keep listening till the end for bonus Easter eggs of beloved but word-scrambling tunes:

Clearly a parody done in love, we’ll be singing this one for a long time to come.